Outstanding in the field

The Michigan Vegetable Council sought to honor his dedication to their sector and recently presented Tanis with their 2019 Master Farmer Associate Award.

According to Greg Bird, the council’s executive director, “This award is presented annually to an individual or business actively supporting the vegetable production industry in Michigan. It recognizes leadership roles in industry and community organizations and support of vegetable crop research.” 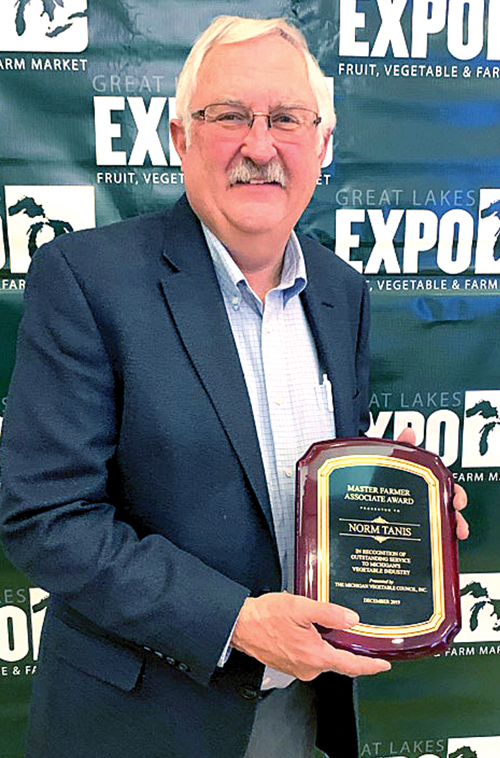 Imlay City’s Norm Tanis was given a Master Farmer Associate Award by the Michigan Vegetable Council in honor of the 40-plus years he’s served local growers.

In October, Tanis retired as a crop representative with Helena Chemical.

“The industry will miss Norm’s expertise, but odds are Norm will still be in the Imlay City area and will still have his hands in agriculture,” Bird said, noting that Tanis grew up on a muck farm in Imlay City.

Family and friends joined Tanis in Grand Rapids last month where he was formally presented with the Master Farmer Associate Award at the Great Lakes Fruit, Vegetable and Farm Market Expo Banquet at the Amway Hotel.

“It’s always pretty neat to be honored by your peers,” Tanis said of the recognition.

His long career, launched in 1976, had him working with multiple generations of local growers.

At the time of his retirement, Tanis was working with the third generation of the family-owned Van Dyk Farms. One of those third generation growers, Adam Van Dyk, appeared in a video documenting Tanis’s service to the industry.

Prior to Helena, Tanis worked for Grower’s Service and United Agri Products.

“Norm is known to his growers for his passion of helping others. Norm considers his business as being in the relationship business. What better way to do this than by working with Michigan State University Extension,” Bird said.

“Norm not only brings fertilizers and pesticides to the growers, but also information and knowledge.”

Although he was born and raised on a muck farm, Tanis is experienced with many other specialty crops, including fruit. Recently, he helped Westview Orchards in Romeo monitor their trees for apple blossom density using a drone.

“I think it’s more than a job for Norm. He takes a real interest in the well being of our families and our business,” Westview owner Abby Jacobson said.

“He can bring his experience but he also cares.”

In the video, Tanis offered this reflection on his career.

“We think we’re in the chemical business or in the seed business what we’re in is the people business. My favorite part is the people and the relationships that we built over the years.”

Two other local growers were also honored at the Great Lakes Fruit, Vegetable and Farm Market Expo. Will Bristol of Almont’s Brookwood Fruit Farm and Henry DeBlouw of Mike Pirrone Produce in Capac were named to the “40 Under 40, Class of 2019” by Fruit and Vegetable Growers News magazines and recognized at a reception during the conference last month.

Bristol serves as chief financial officer on his family’s farm and DeBlouw is president of the produce company.

According to the magazines, “Bristol works alongside his father on their fifth generation family fruit farm growing apples, tart cherries and peaches. He currently serves on the board for the Michigan State Horticultural Society; Great Lakes Fruit, Vegetable, and Farm Market EXPO planning group; and the Apple Division of MACMA. Bristol also works as the precision ag lead for the Michigan Division of Nutrien Ag Solutions. He and his wife, Andrea, have three children.”

Of DeBlouw, the magazine wrote, “DeBlouw is a grower/packer/shipper of high end conventional and organic produce. He has been working for the family business since he was 12 — running crews in the fields, overlooking harvesting, packing, distributing, and most importantly bringing product to market. He has served retail, foodservice, meal kit, online delivery, food banks, schools, processors and wholesalers all over the country.”