Imlay City second at own tourney

Harper is MVP, Dwyer and Stanton win titles for Almont 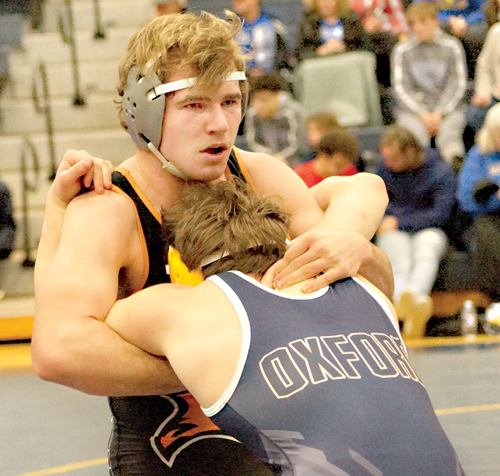 For his performance, Harper locked up MVP accolades for the upper weight classes.
Israel Santaella and Cristian Rojas gave Imlay City seconds. Santaella made it to the 119-pound championship match where he was pinned by Flint Powers foe Sean Spidle with 52 seconds gone and Rojas dropped a 5-4 verdict to Byron’s Zack Hall in the title clash at 125 pounds.
Michael Ashbrook had the next best Imlay City showing, acquiring a fourth. He reached the third-place match at 103 pounds where he was pinned by Almont’s Maria Stanton with 2:43 gone.
Imlay City also received fifths courtesy of Dakota Sandzik (119), Harley Hartwick (125), Anthony D’Ambrosio (130) and Austin Herrera (152). Sandzik wrapped up his run when he pinned Mount Morris counterpart Matt Allen with 1:10 elapsed; Hartwick ended his stint with a 13-12 victory over Brandon’s Alexander Hernandez; D’Ambrosio completed his run with an 8-0 triumph against Almont’s Trenton Kruse; and Herrera finished his stint when he pinned Lutheran North’s Sam Saje with 53 seconds gone.
Dallas Stanton and Mathew Dywer led Almont with firsts. Stanton reached the 112-pound title tilt where he handed Carrollton’s Michael Boyd a 7-2 setback and Dwyer advanced to the championship match at 145 pounds where he made Oxford’s Logan Edwards absorb a 15-4 loss.
Gavin Dempz collected a second for Almont that day. Dempz gained admittance to the 130-pound title tilt where he fell 9-1 to Lake Fenton’s Jack Conley.
Maria Stanton (103) and Lane Jackson (152) gave Almont thirds. Stanton completed her run when she pinned Imlay City’s Michael Ashbrook with 2:43 elapsed and Jackson wrapped up his stint when he pinned St. Clair’s Austin Currie with 2:13 gone.
Trenton Kruse had the other Almont placewinning performance, claiming a sixth. He ended his run at 130 pounds with an 8-0 loss to Imlay City’s Anthony D’Ambrosio.