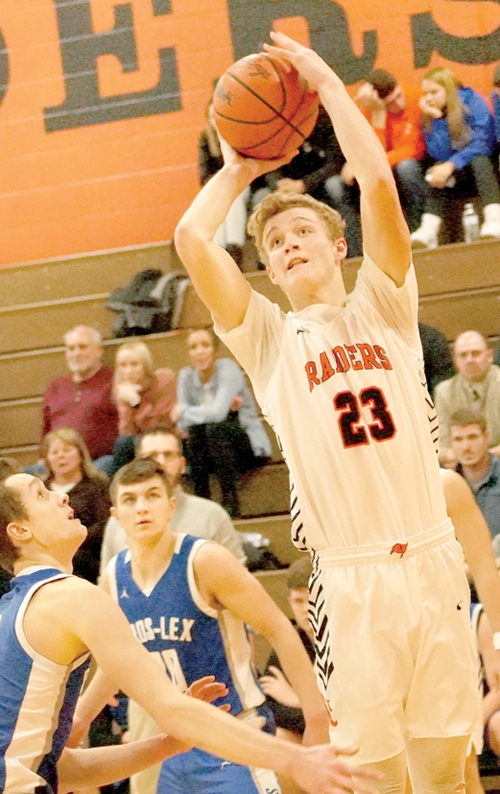 Colby Schapman, of Almont, looks to connect on a jumper Friday versus Cros-Lex.

ALMONT — Almont absorbed a 57-42 loss to visiting Cros-Lex in a Blue Water Area Conference varsity boys’ basketball encounter last Friday night.
With the outcome, Almont slips to 2-3 and 0-1.
In Friday’s encounter, Cros-Lex opened up a 13-4 lead after one quarter was over with.
The middle two quarters saw Cros-Lex accumulate 32 total points and Almont manage 19, leaving them ahead 45-23 with 24 minutes elapsed.
Almont then outscored Cros-Lex 19-12 the rest of the way, only to fall 57-42 when the final buzzer sounded.
Gabe Bourdeau collected 15 points, including five trifectas, and Joey Savel supplied 10, featuring a pair of treys, to lead Almont. The Raiders also received points courtesy of Grady Nash (four), Blake Cody and Charlie Koenig (a triple each), Mike Rinke, Colby Schapman and Scott Pape (two apiece) along with Blake Campbell (one).