Dryden falls to Richmond in finals 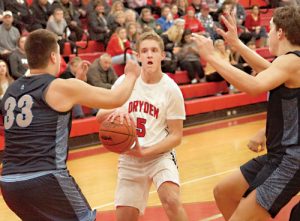 Ethan Ledford, of Dryden, looks to score during his team’s game with Richmond Saturday night.

DRYDEN — The Dryden varsity boys’ basketball team put up a good fight, before falling by a 68-58 count to Richmond in the championship game of the Paul Grondin Classic it hosted last Saturday evening.
With the decision, Dryden now stands at 3-2 this season.
In Saturday’s championship game, Richmond jumped out to an 18-12 advantage after one quarter was done.
The next eight minutes of hoops action saw Dryden accumulate 20 points and Richmond generate 17, closing the gap to 35-32 at halftime.
When play resumed, Richmond struck with a 16-9 third quarter advantage. That padded their cushion to 51-41 with 24 minutes elapsed.
Both sides then hit for 17 points apiece during the final quarter of action, leaving Richmond ahead 68-58 at night’s end.
Jack Kaplan (20, including a trifecta), Nathan Schenkel (18, featuring a pair of treys) and Ronny Hudson (10, with a pair of triples) led Dryden with double digit point totals. They were backed by Ethan Ledford (seven points, including a trifecta) and Jacob Livingston (a trey).