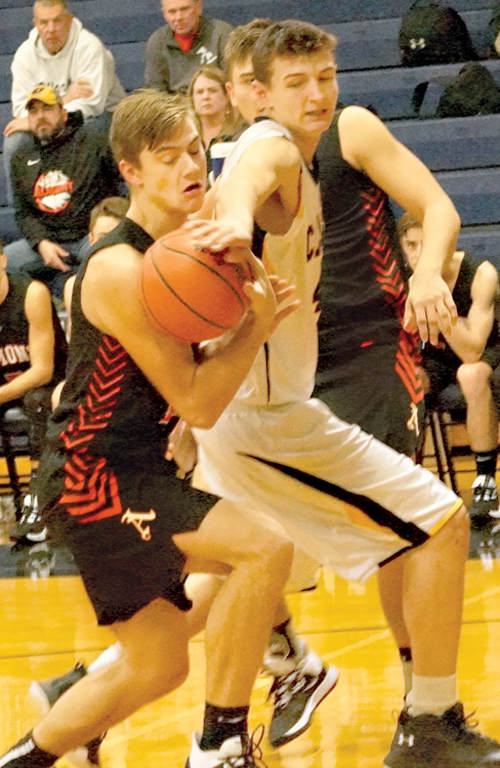 Almont’s Mike Rinke (L) and Capac’s Kayden Braun (R) battle for a loose ball during their non-league encounter this past week.

TRI-CITY AREA—Almont handed host Capac a 72-31 setback in a non-league varsity boys’ basketball clash on Tuesday, December 17.
With the result, Almont raises their mark to 2-1 overall. Capac slips to 1-3 this season.
In Tuesday’s clash, Almont bolted out to a 16-4 advantage after one quarter was done and widened the gap to 39-13 at halftime.
When the action resumed, Almont struck with a 24-14 fourth quarter advantage. That left them ahead 63-27 with 24 minutes gone.
Almont then outscored Capac 9-4 the rest of the way, good for a 72-31 win at night’s end.
Mike Rinke (17) and Gabe Bourdeau (11, featuring three treys) led Almont with double figure outputs. Brendan Haldeman (nine), Joey Savel (six, with a pair of triples), Grady Nash and Scott Pape (six each), Charlie Koenig, Jacob Rayl and Colby Schapman (four apiece), Blake Cody (three) and Brett Wrobel (two) also reached the scoring column.