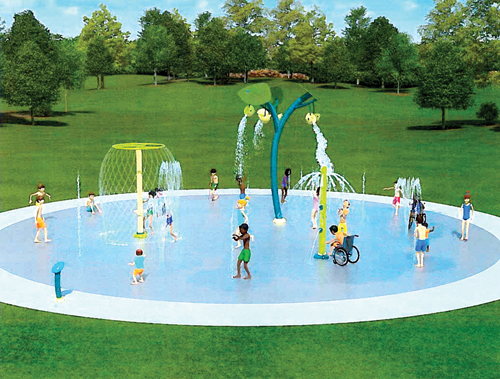 IMLAY CITY  — The City of Imlay City has been awarded a $150,000 grant toward construction of a $364,000 splash pad adjacent to the Alvin Norlin Memorial Pool.
The funds for the water feature are being provided through a Michigan Dept. of Natural Resources (DNR) Recreational Passport Grant.
Having applied for the funding earlier this year, the city was recently notified it had scored 195 out of a total 250 points to qualify for DNR grant funding.
The $150,000 award to Imlay City is the highest allowable under the terms of the city’s grant request to the DNR.
The grant award was one of 18 Recreation Passport Grant awards (totaling about $2 million) approved by the DNR in 2019.
City Manager Tom Youatt said the size of the new water feature will approximate the footprint of the existing swimming pool.
He said the splash pad project is being engineered by Rowe Professional Services and will utilize control systems from Penchura/Aquatix.
He added that the splash pad will feature water fountains, spill buckets, water jets, seating, shaded areas and various other water-related features.
“We’re very pleased to have received this grant,” said Youatt. “From a recreational perspective, we feel this is going to be an exciting addition for our city.
“The number of people using the city’s swimming pool has been up,” he said. “We expect a lot of children and families to enjoy this summer entertainment option in the years to come.”
Situated at the northern boundary of Imlay City’s Lamb-Steele Park, the Alvin Norlin Memorial Swimming Pool has been providing a safe and fun outdoor place for the public to swim and take swim lessons for nearly 30 summers.
The late-Alvin Norlin was a former Imlay City school teacher, principal and superintendent of schools.
Both the village of Capac and Imlay Township are prior Recreation Passport grant recipients. Funds for the grant program come from the sales of the state’s Recreation Passport, the $11 annual pass that grants resident’s vehicle entry at state parks and recreation areas throughout Michigan.