on earth in Lion’s poster competition

ALMONT/DRYDEN — A 13-year-old Dryden student has won the 2019 Michigan Lions Club Multiple District 11 “Peace Poster Contest.”
Aubrey Weber, a 7th grader at Dryden Jr. High School, recently took top honors at the Lions’ State competition, having first won at both the local and district levels.
On Nov. 11, Aubrey’s poster entry was selected “best” by judges at the Almont Lions Club; followed by another first-place win at the Lions District 11-D2 competition, hosted by the Hadley Lions Club.
As a result of her three wins, Aubrey will soon be the recipient of three checks totaling $600; including: $100 from the Almont Lions; $200 from District 11-D2; and $300 for her win at Michigan Multiple District 11. 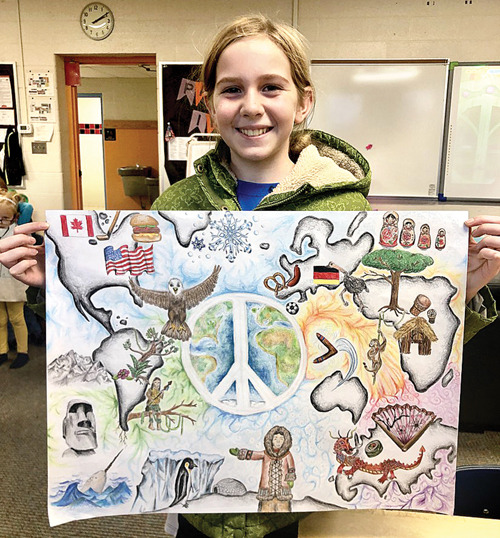 Thirteen-year-old Aubrey Weber displays the ‘Peace Poster’ that has earned her first-place at Michigan Lions Clubs’ 2019 local, District and State competitions. Aubrey is sponsored by the Almont Lions Club.

The daughter of Matt and Laura Weber of Metamora, Aubrey is a relative newcomer to Dryden Schools, having arrived in late October from Lapeer’s Rolland-Warner Middle School.
“This contest was all new to her,” said her mom, Laura Weber. “They didn’t have this at her former school. She found out about it from her new art teacher and decided to enter.
“Aubrey has liked to draw and paint since she was four or five years old,” said Laura. “She’s very creative and interested in making things — whether it’s drawing, painting or sewing. And she’s very attentive to detail.”
Aubrey’s been getting plenty of attention, herself, during the past year.
The Michigan Lions’ “Peace Poster Contest” isn’t the only time in 2019 that Aubrey’s artistic talents have come to the attention of judges.
In February, while at Rolland-Warner, Aubrey was a winner in an art competition sponsored by the Michigan Art Education Association.
“It seems like her artistic abilities have really started to bloom during this past year,” said Laura.
So too, is her daughter’s interest in working toward a more peaceful planet; as evidenced by the quote Aubrey provided her Almont Lions Club sponsors.
“The only true peace you will find on earth, is the peace that comes down from above,” said Aubrey.
In addition to skills with pencils and brushes, Aubrey’s interests extend to athletics (soccer and ice hockey) and music (the piano).
She has four siblings; older brother Eli, 14; sister Lilah, 11; and twin brother and sister, Issac and Claire, both age 6.
Wes Wagester, Almont Lions Club 1st Vice President, said Aubrey’s win at the State competition marks the second consecutive year the Almont Lions Club has sponsored the “Best in Michigan” Peace Poster winner.
Ironically, Wagester said both winners have been Dryden Jr. High School students.
“We’re very proud and pleased to have been able to sponsor Aubrey,” said Wagester. “We congratulate her successes and wish her well on the national stage.
Aubrey explained that the inspiration for her art was self-conceived.
“I just randomly thought of it and sketched out designs on a small piece of paper,” Aubrey recalled. “Then it started coming all together, piece by piece.
“I’ve never taken art classes outside of school,” she said. “All of my talents are gifts that God has blessed me with. I’m really thankful for my creative abilities.”