DRYDEN TWP. — Seven Ponds Nature Center has bestowed its first ever honorary lifetime membership to auctioneer Brian Rowley. For more than 20 years, Rowley has donated his time and expertise to the center for various fundraising events. For that reason, the center’s staff and volunteers wanted to honor his generosity with a special gift.

“The board of directors thought it would be a nice gift for Brian,” said Daryl Bernard, Seven Ponds Executive Director.

“He definitely helps us bring in a lot of dollars. Brian has a way of getting people to open up their wallets.”

Bernard said although they’re still tallying numbers from the live and silent December 7 auction, they know they’ll net more than $20,000 in proceeds for the third year in a row. 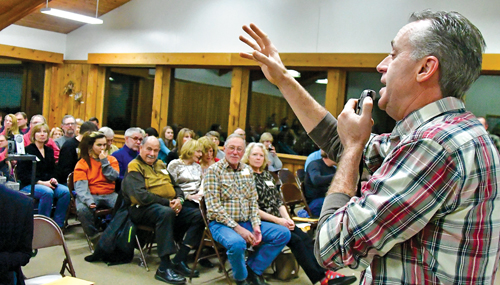 In recognition of the 20-plus year’s he donated his services to the nature center, Seven Ponds presented auctioneer Brian Rowley with their first ever honorary lifetime membership.

“It’s right in line with last year which was our best ever. Our holiday auction is the best fundraiser of the year for us. It helps us see the budget through to the end of the year and kick off the new year,” he said.

Bernard said that even if auction guests don’t plan to place a bid in the live auction, they still settle in for the evening’s entertainment, courtesy of Rowley who owns Rowley’s Auction Service, based in Lapeer.

“Brian puts on a good show. He’s funny and the crowd loves him. He’ll banter with people in the audience and call people out. Of course, it’s all in fun and everybody enjoys it,” he said.

The honorary membership came as a surprise to Rowley and some of his family members were on hand for the special occasion too. In addition to the holiday auction, Rowley has also been offering his services at Seven Ponds’ new spring fundraiser, Corks and Caps.

“We want to thank everyone who attended or participated or donated to this year’s holiday auction. It takes the work of many to make it all possible and it’s what makes Seven Ponds a special place to be,” Bernard said, noting that all items up for grabs are generously donated by supporters and people in the community. The party and auction are open to Seven Ponds members and their guests.

Members of the Stingers/Friends of Seven Ponds group headed up food and refreshments at the auction; Friends of Herbs members crafted holiday decorations and Mutch’s Hidden Pines tree farm donated trees and greens for making wreaths.

The center’s 2019 Special Gifts Campaign is currently underway. Bernard said thanks to gifts, both large and small, the center is often able to meet their goal. Special Gift donations can be made via the center’s website, sevenponds.org.

For more information about making a donation or upcoming events, call Seven Ponds at 810-796-3200.