Almont opens with a victory 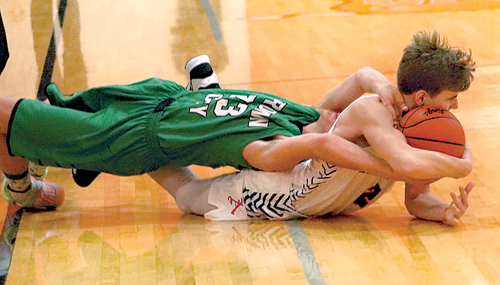 ALMONT — Almont defeated Brown City, 55-37, in a non-league varsity boys’ basketball clash last Wednesday night.
With the result, Almont raises its mark to 1-0 this season.
In Wednesday’s clash, Almont grabbed an 11-8 edge after one quarter was over with.
Quarter two saw both teams net 13 points, giving Almont a 24-21 lead at the half.
When the action resumed, Almont started to pull away. Thanks to a 17-7 third quarter edge, the Raiders widened the gap to 41-28 with 24 minutes gone.
Almont then outscored Brown City 14-9 from that point on, closing out a 55-37 win.
Joey Savel (13, featuring three treys), Brett Wrobel (12, with four triples) and Gabe Bourdeau (10, including a three-pointer) led Almont with double figure totals. Colby Schapman (seven points), Mike Rinke (five), Charlie Koenig (four), Jacob Rayl (a trey) and Grady Nash (one) also reached the scoring column.