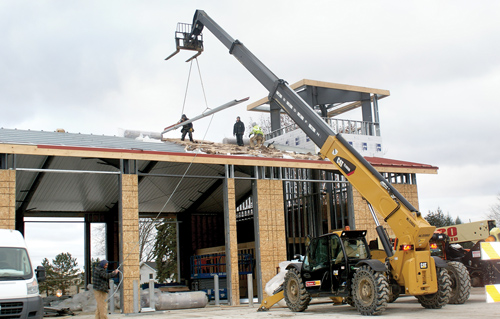 He expressed as much at the Imlay City Commission’s meeting on November 19.

Youatt told commissioners that he regularly visits the construction site, but had noticed a relative lack of progress.

The city contracted the construction project out to H2A Architects and Superior Construction, with engineering services being provided by Rowe Professional Services.

He pointed out that the work-related delays may be attributed to periods of the successive days of rain, or to the winter storm that two weeks earlier had dropped more than a foot of snow in the Tri-City area.

However, Youattt said it has taken some additional site visits and more serious conversations with contractors before he noticed the desired progress.

“I’ve been most concerned about the remaining concrete work being completed and getting the roof and siding up before the real bad weather hits,” said Youatt. “The building needs to be all buttoned up for winter.

“I’ll feel a lot better about things when the building is all enclosed,” he said. “Then they can concentrate on doing the indoor work.”

The fire hall’s construction was to have been completed by late 2019 or early 2020, a goal Youatt still believes is possible.

“We’re still looking at late January, though it could take longer,” Youatt admitted.

“I am pleased with the recent progress,” said Youatt at the Dec. 4 meeting. “They appear to have increased the number of construction workers at the site.

“I’m hoping to see it fully enclosed and with some heat in that building soon,” he continued. “There’s still a lot of work to be done.”

Youatt believes the Imlay City Fire Department could physically occupy the new fire hall within about 30 days of completion.

“The building will still need to be equipped with its new furnishings, including desks, chairs, computers and other needed equipment,” he said. “But the fire department should be able to move into the new building
after that.”