Middle schoolers with a big plan

CAPAC — A trio of middle schoolers has a bold vision to make Lions Park better accessible to all users and they hope the community can help in that quest.

Last month, members of Capac’s FIRST LEGO League (FLL) Robotics team, Bots with Soul, garnered approval from the village council to install four new features in the park along with new surfacing that would accommodate visitors in wheelchairs.

“All kids should be able to play and it’s not fair to limit people with disabilities from being able to enjoy the park,” said Flower Alameida.

“We’re excited to do this project.”

Flower, along with Braden Deussen and Eva Seeley, estimate they’ll need to raise $27,000, not including labor, to turn their vision into reality.

Braden, who’s in fifth grade, and Flower and Eva, who are both sixth graders, started taking a look at the village’s parks as part of this season’s FLL “City Shaper” Challenge. FLL organizers challenged teams to “help the cities, towns, and places you call home reach new heights.”

Flower, Braden and Eva visited all three of the parks in the village limits—Lions Park, Whistle Stop Park and the Capac Youth Sports complex—with clipboards in hand so they could collect data and survey park users.

“Based on the data and our prior knowledge of the park, we decided Lions Park was most in need of updates,” Flower said. 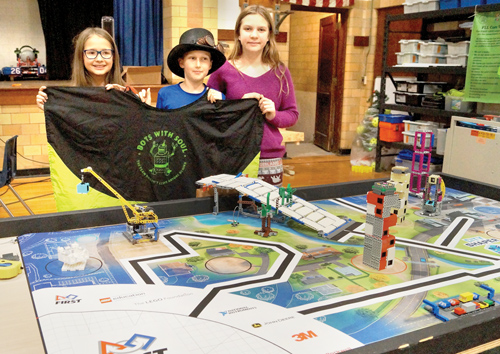 The Bots with Soul team will need to raise $27,000 to make their park improvement project a reality.

The trio started to build a plan and then voted on what play structures to include.

Braden described the “Swing Accelerator” as something similar to a tire swing but with a solid bottom and the “Glide Along” like a chair zipline. Both would require an adult to lift a child onto the structure. Two others—an accessible merry go round and scaling wall—would allow park visitors to use those pieces from their wheelchairs.

“The Merry Go Round is flush to the ground and there are gates that can be closed to keep wheelchairs secure,” Eva said.

“There’s also room for other kids to ride and a mechanism that keeps the whole thing from going too fast.”

The team’s proposal calls for adding the new play structures to existing playscapes and then adding a shock-absorbent surfacing material to the entire play area.

Being able to move and play is important for kids of all abilities to build and improve their sensory, motor, cognitive and social/emotional skills.

Having an improved park area could also serve as a “welcoming beacon” the group told village leaders.

Braden explained, “The park could bring in new potential residents because not that many have that kind of accessibility.”

Their goal is to start actual installation sometime in the spring or early summer of 2020. They hope local contractors will be able to donate the site work labor.

“Kids don’t always think they can affect change in their communities but it’s just a matter of finding opportunities,” Antilla said.

“This season’s challenge was something the kids could really relate to and that helped them come up with this idea.”

Donations for the Bots with Soul Lions Park project can be directed to Capac Community Schools, P.O. Box 610, in care of the ‘FLL Playground Program.’