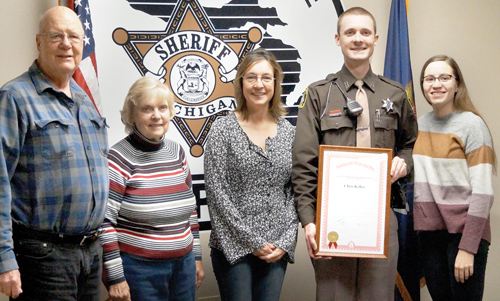 On hand to witness the presentation were Chris’s grandparents Ron and Judy Stigleman, mom Tracey Keller and girlfriend Kayla Spencer.

LAPEER — From a young age, Chris Keller knew he wanted to be a police officer. Now, before he even enters the police academy, the 2016 Imlay City graduate is accumulating accolades that usually go to officers with decades of experience.

On Friday, State Senator Kevin Daley stopped by the Lapeer County Sheriff’s department where he presented Keller and Sgt. Joe Nesbit with special tributes recognizing Keller’s efforts to save the life of a co-worker and Nesbit’s work to help train future officers, like Keller.

“Chris exemplifies everything we stand for,” Sheriff Scott McKenna said.

“We’d love to see him work on the streets of Lapeer County for us.”

Keller is credited with springing into action in July at the Kroger store in Imlay City where he works. A fellow employee was choking and Keller performed the Heimlich maneuver on the man. After the victim lost consciousness and collapsed, Keller massaged the man’s neck to further dislodge the piece of food and when he regained consciousness he was able to spit it out.

“I don’t think of it as heroic,” Keller said.

The 21-year-old said he knew what to do thanks to the training he received as a member of the Lapeer County Sheriff Department’s Explorer program and his instructor Sgt. Joe Nesbit. Keller joined when he was just 14 and eventually rose to the rank of lieutenant during his six years with the program. For the past three years, Keller has been a reserve officer with the sheriff’s department.

Nesbit said the Explorer Program, open to anyone 14 to 21 years old, helps expose teens and young adults to careers in law enforcement. They learn the ins and outs of how traffic stops and building searches are
conducted, ride along with officers in the field and spend time working and observing in the jail, Central Dispatch, Animal Control and various divisions in the department.

There are 14 Explorers in the program today and Nesbit has overseen it for the last 21 years. McKenna and Nesbit said they know of at least 25 Explorer participants who have since gone on to police or military careers.

“Chris excelled in the program and hopefully he can come back to work with us someday,” Nesbit said.

Keller is currently studying criminal justice and business administration at Saginaw Valley State University and plans to enter the police academy next year. Once he completes that, Keller said he’d like to find a job close to home, ideally with the department that gave him his start.

On hand for Friday’s presentation were Keller’s mom, Tracey; grandparents Judy and Ron Stigleman; and his girlfriend, Kayla Spencer. Joining Nesbit was his wife, Wendi and her son, Kayden Walker.