do not support claims of racism

ALMONT — Almont Schools Supt. Dr. William Kalmar is responding strongly to a myriad of media attacks against Almont Schools, the Almont football team, fans and Almont residents in the aftermath of the Raiders’s 36-8 win over Detroit’s Denby High School on Nov. 23.

Among the allegations being leveled in Detroit newspapers and on social media, are that Almont spectators spat upon, threw garbage, physically assaulted and shouted out racial slurs at Denby players at the conclusion of the Nov. 23 Division 5 State Championship game that took place in Walled Lake.

Kalmar, who was on the field and witnessed first-hand the altercation between Denby players and some Almont supporters, is now sharing what he describes as being the facts.

He said the facts are based on an internal investigation that included reviewing both game video and video of the altercation itself and interviews of witnesses and spectators, along with information and evidence gathered and provided by Walled Lake Police and the Michigan High School Athletic Association (MHSAA).

The game had to be suspended by MHSAA officials with about three minutes left on the clock, due to repeated penalties and personal fouls by Denby players, including blindside blocks, face mask penalties and a Denby player pulling the helmet off an Almont player who was on the ground, and then kneeing him in the head.

Kalmar noted that all of the aforementioned actions can be clearly seen on the game film, which is being reviewed by the MHSAA. 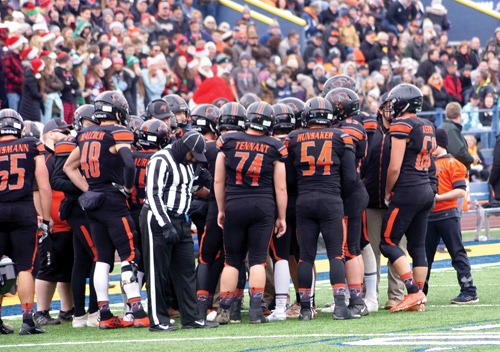 The district’s internal investigation resulted in one spectator being banned from all sporting events for provoking Detroit Denby players.

In retrospect, he believes it was the collective behavior of the Denby football team that aggravated an already tense situation.

That is also the opinion of MHSAA official Brent Shoemate, who issued a statement shortly after the game.

“Almont displayed exceptional sportsmanship and composure and never retaliated or complained while they were receiving illegal hits from the opposing team, such as blocks in the back and blindside blocks,” Shoemate said in his post-game report.

“Almont should be commended and praised for maintaining their composure and for helping the officiating crew maintain as much control as it could in what was a difficult game to manage and officiate.”

Kalmar admitted that video footage shows a handful of spectators in the stands, including one in particular, who helped fuel the emotions of Denby players.

“The only incident of spitting and foul language we are aware of is that individual spectator whose identity has been turned over to Walled Lake police,” said Kalmar.

“That individual is not an Almont resident, has never lived here as far as we know, and is not an alumnus.”

Kalmar said the individual, whose name is being withheld pending possible charges, has been notified in a letter from Almont Schools Athletic Director Ross Gauthier that he has been banned from attending any future sporting events involving Almont students, whether the games take place in Almont or elsewhere. The following excerpts are from Gauthier’s letter.

“Your behavior of provoking Denby’s student-athletes, including spitting, along with your foul and abusive language toward (Denby) student-athletes and coaches is unacceptable and will not be tolerated at our athletic events,” Gauthier wrote.

Kalmar said he cannot with absolute certainty rule out the possibility that racial comments occurred, however, there is no evidence thus far to prove they did.

“A Denby cameraman and the daughter of a Denby coach, who were standing behind our stands, stated online that there were multiple slurs,” said Kalmar. “They have provided no evidence of this to us, the Walled Lake police or the MHSAA.

“They were seen recording the game but have not turned in video showing such actions,” he noted. “I had a (Almont) principal, our Dean of Students, and many teachers in the stands at the game and none of them reported hearing racial slurs.”

Kalmar also addressed allegations that an Almont marching band member had taunted Denby players as they intermingled while exiting the field.

“After our interviews and conversations with people at the scene, it is clear our marching band member did not taunt the Denby player,” Kalmar said. “In the video, you can see band members standing aside from the confrontation and not engaged in any way.

“They also claimed that garbage was thrown by our spectators on their players,” he continued. “Aside from Denby players throwing their helmets, no one throws anything in the video. There is not even trash on the ground.

“The outrageousness of the claims has grown tenfold on social media,” Kalmar lamented. “They went as far as to claim someone was taunting them with a noose — which in reality was our Dean of Students handing a Denby player his helmet back.

“All we can confirm is that a few spectators did yell at Denby players in general, and one spectator spit back on a Denby player.”

Kalmar said there is not a shred of evidence that any Almont students participated in the confrontation; nor did any Almont football players or coaches, who were huddled together in the opposite end zone, engaged in post-game conversation.

Kalmar said the district has reached out to Denby High School authorities and Detroit Public Schools five times; including by letter to DPS Supt. Dr. Nikolai Vitti, but without response.

“The Denby AD has spoken twice with our AD (Gauthier) and apologized for his players and coaches,” Kalmar said. “No one has provided us with video or any specifics to investigate their many allegations.”

Kalmar said representatives from the Michigan High School Athletic Association were planning to meet on Monday, Dec. 9, to revisit the incident and issue a statement; however, as of Tuesday afternoon, no official statement was forthcoming.

“We’ve really been taking it on the chin in the media and most of it is simply not true,” said Kalmar. “What’s worse is that these people know it’s not true.

“It’s inexcusable that these lies and distortions continue to perpetuate two weeks later.”