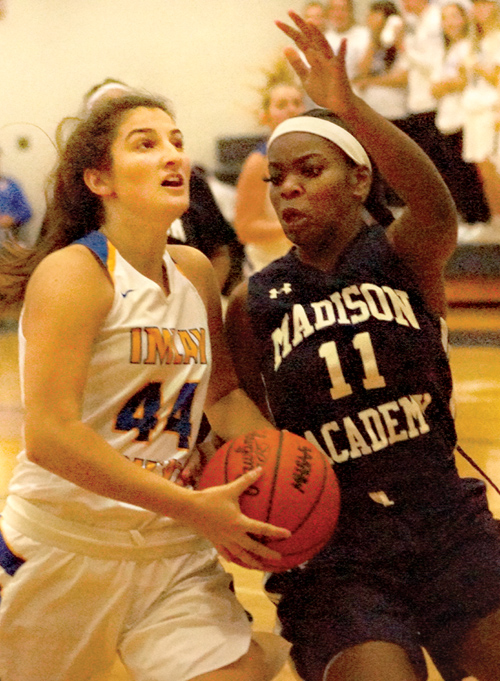 Imlay City’s Isabella Aune drives to the hoop in a game Monday versus Madison Academy.

IMLAY CITY — Imlay City registered a 61-17 triumph against visiting Madison Academy in a non-league varsity girls’ basketball game Monday night.
With the result, Imlay City raises its mark to 2-1 this season.
In Monday’s game, Imlay City jumped out to a 16-6 advantage after one quarter was over with and widened the gap to 35-13 by halftime.
When the action resumed, Imlay City continued to pull away. Aided by a 15-2 third quarter edge, the Spartans went up 50-15 with 24 minutes gone.
Imlay City then outscored Madison Academy 11-2 the rest of the way, finishing off a 61-17 win.
Mary Lengemann netted 14 points and Abigail Thibodeau supplied nine to lead Imlay City. The Spartans also had Jaya Forti (eight points),
Kayla Rossen (six), Mackenzie Allen and
Lily Lengemann (five apiece), Delayna Osko, Isabella Aune and Madison Ross (four each) along with Ana Lengemann (two) reach the scoring column.