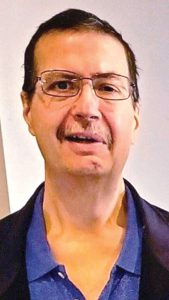 Gregory Bissett, age 53, of Imlay City, MI died Thursday, December 5, 2019 after an extended illness at Select Specialty-McLaren Hospitals of Flint, MI. Gregory George Bissett was born December 1, 1966 in Lapeer, MI. He was the son of the late Frederick Sheriden and the late Katherine Estella (Schriber) Bissett.

Greg grew up and lived most all of his life in the Imlay City area. Greg graduated from Imlay City High School in 1984; and graduated from Macomb County Community College with a degree in printing. He was a Boy Scout and an Eagle Scout for the Imlay City Boy Scouts. Greg was a member of the North Goodland Baptist Church, a firefighter for the Goodland Township Fire Department for 32 years and acted as a 4-H advisor. Greg enjoyed caring for his family and spending his free time outdoors.

Those wishing to make memorial contributions may direct them to the family of Greg Bissett.