IMLAY TWP. — Challenges abound on the farm, and farmer/vlogger Kip Siegler has discovered he’s not immune to challenges behind the camera either.
But despite those bumps in the road, Siegler is coming back strong thanks to his ingenuity and the support of the ag community.
“I always try to look at the positive side of things,” Kip said.
Back in September, Kip’s original YouTube channel, Kip Siegler Farming, was hacked by scammers trying to make some quick cash. They didn’t get away with any money but they did gain control of his channel. YouTube suspended his account and while they worked to fix the issue, Kip opted to create a new channel, “Farming with Kip Siegler,” so he could continue educating the public about agriculture. Kip started his foray into vlogging just this past spring, producing more than 40 videos in that time about growing crops and caring for animals at his family’s dairy farm. Along the way his channel attracted more than 3,800 subscribers, including State Rep. Gary Howell who sent Kip a note acknowledging his efforts to reach out to consumers.
Thanks to the “watch time” numbers he generated, Kip was getting compensated by YouTube—the ultimate goal of many video bloggers—but its also what he thinks made him a target for hacking.
Since then he’s had to work at retaining his original subscribers, gaining new ones and building his “views.”
“I knew I had to do something to really make a great comeback,” Kip said.
So he decided to incorporate a drone in his filming and one of his first videos on the new channel gave viewers a birds eye view of the Siegler’s silos and the long climb it takes to get to the top.
Kip also decided he’d pop the question and proposed to his girlfriend, Rochelle Ions, on camera too. During a wood cutting episode, filmed in early November and published on Nov. 13, Kip got down on one knee and Rochelle said “yes.” 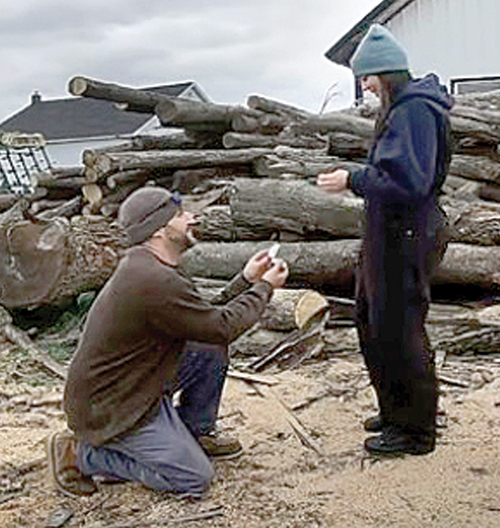 Kip Siegler captured his marriage proposal to girlfriend Rochelle Ions on camera and the couple received well wishes from Kip’s YouTube subscribers around the world.

“I wanted to get the proposal on video because I thought it would be cool for my girls to see too,” Kip said of his two young daughters.
The couple said they were overwhelmed at the response to that video and the well wishes that followed from viewers and subscribers. They plan to get married in September 2020.
Kip said the YouTube community was super supportive during his hacker woes too.
“I met other YouTube farmers and they could understand how difficult that all was because they know what kind of work it takes to make videos,” he said.
“They wanted to help me out and when I started the new channel, they really helped promote it.”
Currently, he’s got more than 1,600 subscribers on his new channel and he’s posting new uploads to both channels.
“Doing this YouTube thing for the last nine months has uncovered a passion that I didn’t know I had and going forward, my goals for the channel are to motivate and educate my viewers and connect with people from all around the world,” Kip said.
Some of his future video projects will include a history of the Siegler’s third-generation farm, founded by his grandparents, John and Jean Siegler. Kip, his parents and two brothers, now oversee the Brown City Road operation.
Find “Kip Siegler Farming” and “Farming with Kip Siegler” on YouTube and Siegler Dairy Farm on Facebook.