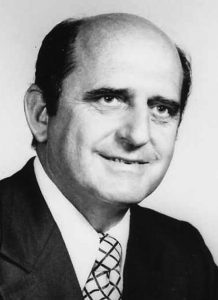 James Clarence Wade passed away on Sunday, December 1, 2019, just after noon at the Waltonwood University assisted living facility in Rochester Hills.
James was born on November 25, 1924 in Herington, Kansas; the fourth son and the youngest of the six children of Milton Albert Wade and Maudie Larene Debus Wade.
He grew up in Herington and graduated from Herington High School in 1942. He then went to work as a telegrapher for the Rock Island Railroad. He was drafted into the Army in 1943. After training, he was assigned to a communication station in Roswell, New Mexico, which was the communication hub between the Pentagon and the White Sands Proving Grounds – the Manhattan Project. While in transit to his posting in Washington
State, he met his future wife, Jane Hoyt, who was headed for her posting at a Hospital in Oregon. After the end of hostilities in Europe, James was posted to Bremen, Germany to oversee the return or disposal of military equipment.
James and Jane were married on August 7, 1946 at the First Congregational Church in St. Clair, Michigan. They initially lived in St. Clair, then moved to Herington before returning to Almont in 1948 and have lived here since that time.
In 1950, James was recalled to active duty in the Army for the Korean War. After 13 months service, he was discharged in December 1951.
In January 1952 he began working for Hamill Manufacturing in Washington, Michigan. He began as their purchasing agent and rose to general manager when the business was sold to Firestone. He later worked for American Equipment Safety Corp., Marsh Plating, and Northwood Industries, retiring in his late 70s.
He was a member of the Almont First Congregational Church and attended both the First Congregational Church in Romeo and the West Berlin Methodist Church in Allenton. He was a member of the Board of Trustees of the Almont First Congregational Church, the Almont Community Hospital, and the Four County Community Foundation. He was a member of the Kansas Masonic Lodge for over 60 years. He coached Little League baseball. In 1965, he designed the high school band uniforms.
He was an avid woodworker. He built the family home. In later years he built dozens of custom cabinets, pieces of furniture, and picture frames.
He was preceded in death by his parents and wife and all his siblings; Clyde Milton Wade and wife Millie Rachel Nantz Wade, Bernadine Eleanor Wade Applebaum and husband Louis Applebaum, Ned Lysle Wade and wife Olivette Marie Schump Wade, Mildred Lucille Wade Potts, and Richard David Wade and wife Bertha Rozella Holt Linn Wade.
He is survived by his daughter; Nancy Jane Wade Korth and husband William Paul Korth of Jenison; son, James Richard Wade Sr. and wife Cynthia Ann Walton Wade of Dryden; and son, David Milton Wade and his wife Darlene Marie Segren Wade of Bloomfield Hills.
He is also survived by Nancy’s children; Matthew James Korth and wife Lisa Hartjes Korth and their children Donovan MacKenzie Korth and Arianna Catherine Korth of Milan, Phillip Andrew Korth and wife Erin Burns Korth on the road somewhere in America, Arizona and Mary Alice Korth of Jenison; James’ children; James Richard Wade Jr. of Almont, Kristina Lee Wade of Sterling Heights, and Jonathan Robert Wade of Dryden and his daughter, Brooke Jaelyn Howie, and David’s daughters, Sara Alice Wade Scott and husband Michael Thomas Scott Jr. of Birmingham and Emily Marie Wade of Bloomfield Hills. Brother-in-law Bennie Bernard Potts of Junction City, Kansas also survives.
He is also survived by numerous nieces and nephews and their families.
Instead of flowers, please make donations to the Almont Community Historical Society Endowment and Project Fund through the Four County Community Foundation or directly to the Society.
The time and place for a memorial service are still to be determined. A separate short internment ceremony at the Great Lakes National Cemetery in Holly will be held at a future date.
The Henry M. Malburg Funeral Home in Romeo is in charge of handling final arrangements.