ALMONT — The Almont football team fell one win shy of a top Division 5 finish it hoped to attain, dropping a 31-17 verdict to Lansing Catholic in the state championship game last Saturday afternoon at Detroit’s Ford Field.
With the outcome, Lansing Catholic wraps up a 13-1 season. Almont watches an outstanding 13-1 campaign reach an endpoint.
“We are so proud of our kids bringing us this far,” Almont Coach James Leusby said. “Obviously, this is not the outcome we wanted but I know that our guys left it all on the field and that’s all we can ask of them,” he emphasized.
“Lansing Catholic made some great plays in key moments of the game and I have to tip my cap to them for that. They made it here for a reason and they proved it. Congrats to coach Ahern on his state championship.” 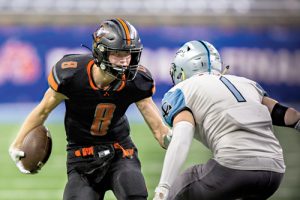 Though it did not end as he had hoped, Leusby said he still will look back on the 2019 campaign with plenty of fond memories.
“This has been a great group of kids to coach and they have set the standard for Almont football,” Leusby said. “This is a season we will never forget and a team that will be talked about for many years,” he noted.
“We have to thank our seniors for leading the way and putting in the work to making this possible. We will certainly miss them next season but we have confidence that they have passed down the will to prepare and drive to succeed to the younger players in the program.”
Leusby and the Almont ballclub are also thankful for the unwavering support provided by the team’s fan base.
“We would like to thank our entire community for their support this season,” Leusby commented. “Every game felt like a home game and that has helped us along the way,” he acknowledged.
“Words can’t fully express how much the support has meant to us. It truly has made this a memorable experience from day one.”
In Saturday’s battle, Lansing Catholic reached the scoreboard first courtesy of a Zach Gillespie one-yard touchdown run and an accurate extra point boot by Jonah Richards. That staked the Cougars to a 7-0 lead with 3:01 showing on the first quarter clock.
It would take Almont 5:54 to answer that tally. Jack Paupert provided the heroics there, toting the ball five yards to paydirt. Ryan Miller added a successful extra point kick, making it a 7-7 contest with 9:07 to play during quarter number two.
The remainder of half number one would prove scoreless.
When play resumed, Almont went up 10-7 when Miller made a 31-yard field goal attempt. There was 6:39 showing on the third quarter clock when his attempt connected.
Just 2:05 later, Almont’s fans would be given further cause to stand up and cheer. This time Michael Lulgjuraj provided the excitement, delivering a touchdown tote from 22 yards out. Miller’s extra point kick split the uprights, giving the Raiders a 17-7 cushion with 4:34 left during quarter number three. 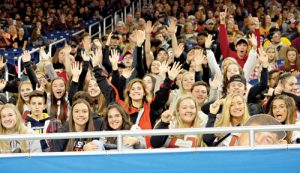 Followers of the Almont football team cheer on the Raiders during their Division 5 state championship game Saturday at Detroit’s Ford Field.

It looked as if Almont was about to put Lansing Catholic away, but their gridiron counterparts would have other ideas.
Lansing Catholic saw to it they would remain in striking distance, getting a 24-yard field goal courtesy of Richards. His effort came with 1:21 showing on the third quarter clock, closing the Cougars’ deficit to 17-10 at the time.
The remaining one-minute plus of quarter three would see neither side change the scoreboard count.
Both Almont and Lansing Catholic headed to the fourth quarter with plans of celebrating a state title, the only question was which team would hoist the championship trophy when the clock zeroed out for the last time.
Lansing Catholic did their best to keep the outcome in doubt a bit longer when Vince Salquist hauled in a seven-yard touchdown pass from Zach Gillespie and Richards split the uprights with a successful extra point kick. That made it a 17-17 contest with 8:45 remaining.
Almont’s next offensive series would prove a shortlived one, eight seconds to be exact. It was there Lansing Catholic landed on a fumble at the Almont 25-yard line.
To Almont’s credit, the Raiders’ defense dug in and made things tough on Lansing Catholic’s offense.
Three plays later, Almont’s defense shut down Lansing Catholic on a fourth-and-16 situation at the Almont 31. The Raiders had dodged a bullet.
Almont’s next offensive series resulted in partially blocked punt.
Their opponents from Lansing Catholic set up at the Almont 38 with plans of acquiring the go-ahead score. There was now 5:05 showing on the fourth quarter clock.
That led to a Gillespie to Mitch Raphael 23-yard touchdown pass and an accurate extra point boot from Richards with 3:41 remaining.
The play saw Raphael originally ruled out of bounds, only to be overturned following a video review. That left Lansing Catholic holding a 24-17 edge at the time.
Almont was intercepted on their next drive.
Not long after, Lansing Catholic found the endzone with a four-yard touchdown by Gillespie. Richards then split the uprights with a successful extra point kick, giving the Cougars a 31-17 advantage with 1:39 remaining.
That would be the last points either side collected as Lansing Catholic ended the contest with a win to celebrate.
For the day, Josh Hellebuyck completed nine of 17 pass plays for 116 yards as Almont’s quarterback. He threw five interceptions en route to those numbers.
His successful tosses went to three different targets. Their ranks consisted of Colby Schapman (five catches for 80 yards), Jack Paupert (three receptions for 29 yards) and Gavin Dempz (one catch for seven yards).
The Almont ground attack wound up with 203 yards on 47 totes.
Paupert (18 rushes for 78 yards), Mason Smith (60 yards on 13 totes) and Michael Lulgjuraj (nine rushes for 55 yards) furnished Almont’s top individual totals. The remaining seven Raider totes netted a combined 10-yard gain.
Jacob Hausmann led the Almont defense with three solos and four assisted stops. Landon Kruse and Blake Kapron (four solos and two assisted tackles each), Michael Rinke (two solos and four assisted stops), Lane Jackson (two solos and two assisted tackles) and Nolan Panduren (one solo and three assisted stops) supported their performances.
The Almont defense also registered a pair of takeaways. Kruse and Paupert (an interception each) furnished those.