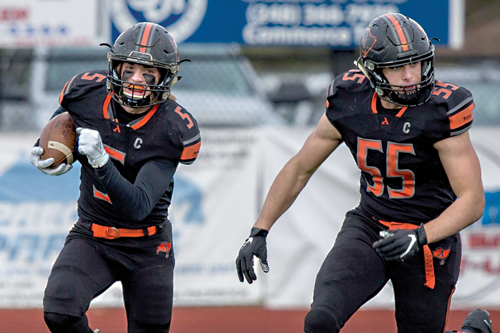 ALMONT — The Almont football team earned their first-ever trip to the Division 5 state championship game, accomplishing the feat with an impressive 36-8 triumph against Detroit Denby in a semifinal battle last Saturday afternoon.
Walled Lake Central High School is where the action unfolded.
With the decision, Almont (13-0) advances to this Saturday’s state championship encounter where they will square off versus Lansing Catholic (12-1). That matchup lists a 4:30 p.m. starting time. Detroit Denby finishes as owners of a 10-3 mark.
“We are so proud of our kids for executing the game plan and keeping their composure throughout the game,” Almont Coach James Leusby said. “Obviously this is uncharted territory for us but this was our goal from day one,” he noted.
“Our seniors have led the way and they will continue to lead us for one more week. We have to thank our fans for traveling over an hour to make this feel like another home game for us.”
In Saturday’s battle, Almont took a 7-0 advantage after one quarter was over with.
Quarter two would see Almont generate nine points, while holding Detroit Denby to none. That made it 16-0, Almont, at the halftime break.
When the action resumed, Almont picked up where it left off. Aided by 14-0 third quarter advantage, Almont built a commanding 30-0 cushion with 36 minutes gone.
Detroit Denby would outscore Almont, 8-6, over the next 7:54 of action. That is when game officials called the contest with Almont up 36-8, due to an excessive amount of personal fouls caused by the Detroit Denby ballclub.
It was an unusual ending to a contest which saw Almont dominate from the first snap until the last.
Almont produced their winning 36-point output aided by a Jack Paupert four-yard touchdown run (followed by a successful extra point kick courtesy of Ryan Miller); a Nolan Panduren safety (he got credit for the two points when Denby’s quarterback was called for intentional grounding while throwing from the endzone); a Josh Hellebuyck to Paupert 32-yard touchdown pass (followed by an accurate extra point boot from Miller); a Paupert five-yard touchdown run (followed by a successful extra point kick courtesy of Miller); a Jacob Castillo three-yard touchdown run (followed by an accurate extra point boot from Miller); and a Lucas DeLaurier 65-yard touchdown run.
For the afternoon, Hellebuyck completed one of two pass plays for 32 yards as Almont’s quarterback. He threw zero interceptions en route to those numbers.
His successful toss went to Paupert.
The Almont ground attack managed 283 yards on 45 totes.
Paupert (16 rushes for 112 yards), DeLaurier (67 yards on two totes), Castillo (14 rushes for 60 yards) and Mason Smith (40 yards on seven totes) supplied Almont’s top individual outputs. The remaining six Raider totes netted a combined four-yard gain.
Jacob Hausmann paced the Almont defense with three solo and three assisted stops. Blake Kapron (two solos and two assisted stops) and Michael Rinke (two solos and two assisted stops) made their presence felt as well.
The Almont defense also registered one takeaway. Hausmann (an interception) furnished that.