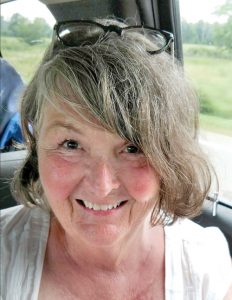 Dar was here now she’s not.
Family inside joke that Mom always expressed she wanted written on her tombstone and in her obituary. In all seriousness, Darlene Jean Whitis, of North Branch, 68, went to be with the Lord Jesus on November 20th 2019 after being diagnosed with stage four pancreatic cancer one month prior to her departure. She passed away peacefully at the Henry Ford Medical Center in Detroit with her husband, Rick Whitis, at her side, holding her hand.
Darlene was born September 13, 1951 to Bill and Alice (Middleton) Bates. Darlene grew up in Flint and moved with her family to Imlay City when she was 14. She was an Imlay City High School graduate and made lifelong friendships there. Darlene, alongside her husband Rick, moved to North Branch with their two children Jeremy and Jennifer after Rick’s service in the Army was final. There, their family grew to include twelve more children! Jessica (Katie), Tom, Molly, Josie, Whitney, Brandon, Katherine (Kass), Hailey, Emma, Seth, Quinton and Dylan, before retiring as foster and adoptive parents in the summer of 2019.
Darlene enjoyed horseback riding, art, helping friends, and spending time with her kids, family, and animals.
Darlene is survived by those named above; her brother, James (and Sharon) Bates; her sister-in-law, Darlena Bates; and her grandaughter, Eden Whitis.
She is preceded in death by her children, Jeremy Whitis, Brandon Whitis and Katherine (Kass) Whitis; her brother, Bill Bates; father, Bill Bates; and her mother, Alice Bates.
Those wishing to make memorial contributions can direct them to the Whitis family.
The funeral was held Tuesday, November 26, 2019 at Muir Brothers Funeral Home of Imlay City, 225 N. Main Street, Imlay City, MI. Pastor Ron Kirsten officiated. Interment followed at Attica Township Cemetery.
Arrangements were made by Muir Brothers Funeral Home of Imlay City.
Please be sure to sign the online register at muirbrothersfh.com to share condolences and memories.