Almont a win away from state title

ALMONT — Four postseason wins down, one to go.
That is the objective for the Almont football team (13-0) as they hope to continue their playoff run with a win this Saturday against Lansing Catholic (12-1) in the Division 5 state championship game at Detroit’s Ford Field.
If Almont succeeds, it will be their first state gridiron title in school history.
It is their initial appearance in the championship game.
Lansing Catholic, the Capital Area Activities Conference White Division runnerup, enters the contest fresh off a 28-14 semifinal victory over Kingsley at Greenville. 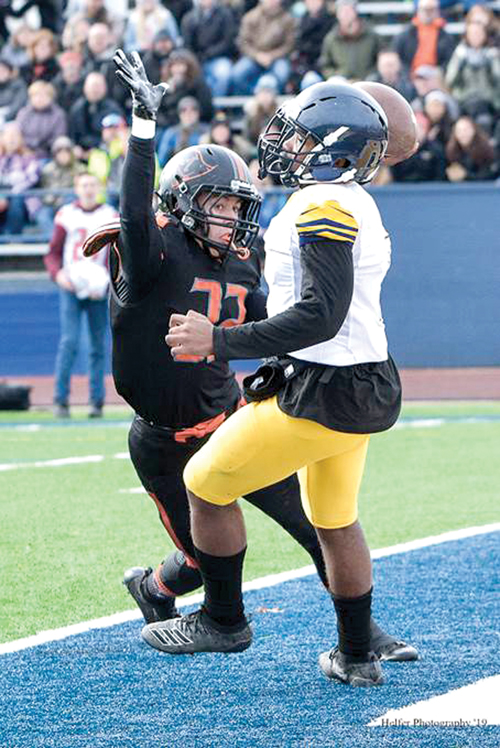 Before that, Lansing Catholic registered triumphs in 11 out of 12 gridiron clashes. That stretch featured a 56-18 win at Lansing Waverley; a 56-28 victory over Grand Rapids West Catholic at home; a 63-13 road triumph against Eaton Rapids; a 35-10 win over Ionia at home; a 21-20 loss to Portland at home; a 55-15 victory at Charlotte; a 25-0 triumph over Lansing Sexton at home; a 56-7 win against Fowlerville at home; a 35-13 road victory over Lansing Eastern; a 28-21 triumph at Olivet; a 21-0 road win over Portland; and a 40-13 road victory against Kalamazoo Hackett Prep.
Almont, the Blue Water Area Conference champion, is coming off an impressive 36-8 semifinal win against Detroit Denby at Walled Lake Central High School.
Prior to that, Almont prevailed in 12 other contests. That successful run included a 54-6 victory over New Haven at home; a 56-7 triumph against Imlay City at home; a 35-0 road win over Algonac; a 61-20 road victory against North Branch; a 42-0 triumph over Cros-Lex at home; a 48-14 win against Armada at home; a 49-0 road victory over Yale; a 50-12 triumph against Cros-Lex at home; a 30-20 road win over Richmond; a 22-20 road victory against Marine City; and a 25-14 triumph against Saginaw Swan Valley at home.
Almont Coach James Leusby knows the assignment his team faces next may be a tough one, but his team welcomes the opportunity.
“The coaching staff will need to have the players ready to play their toughest and most talented opponent thus far,” Almont Coach James Leusby said. “Lansing Catholic will be well coached and have talent at every position,” he noted.
“I know our coaching staff will be working extremely hard to get the players mentally and physically ready to put on a good show for everyone in attendance and watching on the television.”
Leusby lists Josh Hellebuyck (quarterback), Jack Paupert (running back), Jacob Castillo (running back), Michael Lulgjuraj (running back), Mason Smith (running back), Brandon Hunsaker (fullback/guard), Derek Johnston (center), Jacob Hausmann (guard), Jackson Malcolm (tight end) and Colby Schapman (split end) as his possible offensive starters.
He projects Nolan Panduren (end), Meric Okoniewski (end), Michael Rinke (tackle), Lane Jackson (tackle), Landon Kruse (linebacker), Jacob Hausmann (linebacker), Caleb Weigand (back), Jacob Castillo (back), Paupert (back) and Schapman (back) as potential starters on the defensive side of the football.