ALMONT — Almont Raiders fans did all they could to gain homefield advantage in advance of Saturday’s 25-14 win over the Saginaw Swan Valley Vikings.
With the game about 48 hours away, Almont Schools Supt. Dr. Bill Kalmar put out a call seeking volunteers to help remove 10-plus inches of snow and ice from the football stands and field, left over from Monday’s heavy snowfall.
Kalmar said school officials had to make a decision by noon on Wednesday, lest the game be moved to Brandon High School, which had offered its turf field for use.
The plea for help resulted in a veritable army of volunteers showing up Thursday afternoon, equipped with snow shovels, snowblowers and related cleanup apparatus.
An estimated 60 people took part in the near-Herculean effort, all of whom joined in to clear both the home team’s and visitors’ stands.
Working to clear the snow-covered football field in time for Saturday’s Regional title game was schools’ groundskeeper Jerry Pewinski, whose equipment managed to reveal that there was still green turf buried beneath the accumulated snow.
For Pewinski, it was imperative that he and others stepped up to support the hometown Raiders.
“It was a big undertaking,” said Pewinski, “but this game is a big deal for our football team, for our school, and for the whole community.
“We had to get these stands and football field ready for the game,” he said. “With everybody’s help — we got it done.
“It’s taken a real group effort to accomplish,” Pewinski added. “This is something that everyone who helped out here today will never forget.” 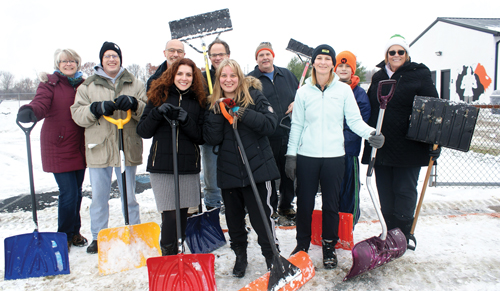 Almont High School teachers showed up in force on Thursday.

Kalmar, who participated in the cleanup along with his daughter, was impressed with the enthusiasm and support shown by the volunteers.
“I was touched by the effort and the volunteerism,” said Kalmar, “especially by our teachers and staff. Virtually, our whole high school faculty was out here today.
“This project was amazing,” he continued. “It was a perfect example of why small schools in small towns work as educational models.”
While the stands and field had been cleared of snow by Thursday afternoon, there remained yet more for Pewinski to do before Saturday’s big game.
“Jerry does our grounds and our (yardline) striping on the football field,” Kalmar noted. “We’re counting on him to do that.”
By game time on Saturday, the markings were complete and the stands were full of fans supporting their respective home teams.
While pre-game field conditions were described as “slick and soft in spots,” both teams battled throughout — with Almont emerging as the winner.
Raiders face Denby
The Raiders now move on to the Michigan High School football semifinals on Saturday, Nov. 23, when they play Detroit’s Denby High School at 1 p.m. on the turf at Walled Lake Central High School.