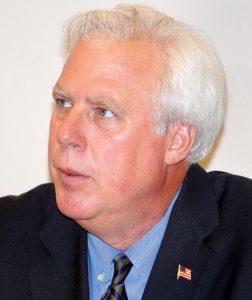 “To be clear, any decision I make will be based on the evidence and facts of the case,” said Sharkey.
Wagner, 38, of Dryden, was killed in what was first described as a trench cave-in while working in the 4000 block of S. Almont Ave. at the Imlay Place Condominiums.
Imlay City police, firefighters, DPW workers and Lapeer County EMS responded to the scene at around 1 p.m., where Wagner had been working in tandem with a heavy-equipment operator.
Imlay City Fire Chief Rick Horton, who was among the first at the scene, said responding emergency personnel began digging by hand in an attempt to extricate the victim, who was later pronounced deceased at the scene.
Police Chief Scott Pike reported that Wagner had sustained a severe head trauma and had probably died instantly.
About three weeks later, Pike reported that new evidence suggested the victim had died not in a cave-in, but after being struck on the head by excavating equipment.
On Oct. 1, Pike issued a press release stating that an autopsy conducted by Dr. Kanubhai Virani of Oakland County revealed that Wagner’s injuries “could not have been sustained by the collapse of falling dirt” and that “the victim was deceased prior to being buried.”
Based on the additional information and his own department’s investigation, Pike requested a criminal warrant.
However, on Oct. 3, Sharkey returned the request to the Imlay City Police Department, saying he wanted to see further investigation and more information before granting a murder warrant request.
At the time, Sharkey said he did not have all the relevant facts, nor did he want to “rush to judgment.”
Based on Sharkey’s comments last week, his opinion has not changed.
As a matter of note, the family of the late Craig Earl Wagner has hired attorney Lee Steinberg to serve as legal counsel.