ALMONT — Almont Village and Township officials will meet on Thursday (Nov. 21) to hear a proposal from local developers to build 200 homes and sever­ al retail spaces on an 80­ acre parcel at the northeast intersection of Van Dyke and Hough Road.
The joint meeting will begin at 7 p.m. at the Almont Municipal Building
at 817 N. Main St. (Howland Road).
The proposal, requesting that the Village of Almont extend water and sewer services to the location, is being presented by Almont Realtor Dan Walker, his father/businessman Roger Walker, and the owners of Blake’s Apple Orchards.
The developers are not seeking annexation of Township property nor a State of Michigan ‘425’ Agreement, which allows two local governments to share tax revenues associated with new development, as part of the request.
Instead, they are eyeing an “interlocal agreement” between the Village and Township that they consider to be mutually beneficial.
Dan Walker, owner of Almont’s Aurora Realty, said the proposed development offers financial benefits to both governmental entities and their residents.
“I see this as being good for everyone involved,” said Walker, who earlier this year purchased and renovated the long-vacant corner property at 102 S. Main St. in downtown Almont.
“The village and township have already identified
the location for future development in their master plan,” said Walker. “The big thing is that we’re local people who want to do right by this community. We have a vested interest in the area that other developers might not.”
While interested in the potential benefits to township residents, Almont Township Supervisor Paul Bowman said it remains some question as to whether the village’s wastewater treatment plant could accommodate the additional demand created by future development.
“The water is provided to the village through an agreement with Great Lakes Water Authority, so water is not an issue,” Bowman said. “But the capacity of the village’s wastewater treatment plant could be.
“Right now, the plant is operating at only 50% capacity,” he continued. “However, the new infrastructure and increased demand might affect the efficiency of the existing plant.” 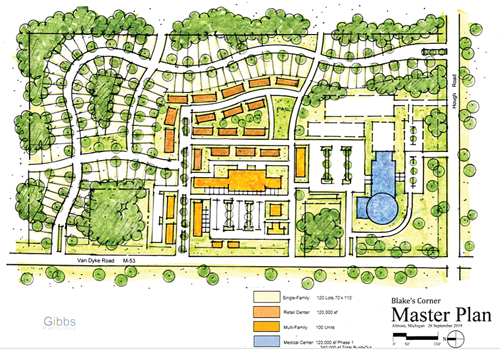 On Thursday, local developers will present their Master Plan for a new housing and retail development at the northeast corner of Van Dyke and Hough Rd. in Almont Township. To accommodate the project, they are requesting Almont Village extends water and sewer services to the site.

Bowman said another challenge to overcome is that Almont’s existing ordinance prohibits distributing water outside the village limits.
“We would need to find a way to work around that ordinance,” he said.
Almont Village Council President, Steve Schneider, said he is excited about the possibilities the new development would offer and favors giving the proposal serious consideration.
“The developers have agreed to pay the cost of extending the water and sewers to the area south of the village, said Schneider, “which would represent a public/private partnership the village could not accomplish by itself.”
Schneider noted that increasing the number of water and sewer users would translate to a reduction in water and sewer rates for Village residents.
“As things are,” he said, “we have very high water rates, in large part because we have such a limited number of users.
“There is also a matter of timing and opportunity,” Schneider. “I feel it’s worth the time and effort to further investigate the developers’ proposal.
“I would support having a study done to determine the potential benefits and drawbacks of extending water and sewer to that area.
“I’d like to see our engineer (Rowe Professional Services) investigate the proposal with the purpose of finding out the potential costs and viability for the village,” said Schneider. “Let’s see what the engineer tells us and go from there.”
Almont Village Manager Mike Connors, however, is concerned that despite having recently invested $1.6 million in the village’s wastewater treatment plant, the facility’s infrastructure may not be sufficient to serve the anticipated increase in sewer customers.
“I support growth and expanding our facilities,” said Connors, “but we first need to have a better handle on our existing facilities before taking on an expansion project.
“We still have a lot of water infiltration into that system during the wet season,” Connors added. “We’ve had overflow issues in the past and want to avoid those in the future.
“I think there are a lot of details to be fleshed out before extending services to 200 new homes.”