TRI-CITY AREA — Snow day #1 is in the books for area schools thanks to a record-breaking snowfall on Monday, Nov. 11.
Flakes started falling on Monday morning, which also happened to be Veterans Day, and the Tri-City recorded between eight and 12 inches total of the white stuff. That evening, all four area school districts announced they were cancelling classes for Tuesday, Nov. 12. 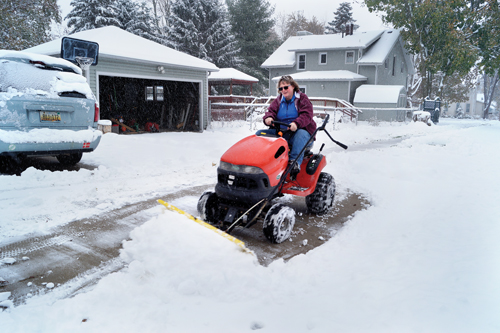 Carole Coomer plows the sidewalk along Caulkins Street in Imlay City on Monday afternoon in anticipation of local school kids, including her own, getting off at the 6th Street bus stop.

According to the National Weather Service, new daily maximum snowfall records were set on Monday for both Flint and Detroit. Flint’s old record—three inches of snow on Nov. 11—dated back to 1933.
Law enforcement officials issued their seasonal reminders for residents on staying safe in adverse winter weather conditions.
St. Clair County Sheriff Tim Donnellon stressed that despite adverse conditions, many accidents can be avoided.
“What people need to understand is that a high percentage of traffic fatalities are the result of poor decision making,” Donnellon said.
“In bad weather, it may come down to something as simple as cancelling a trip for a day. If you have to go out, watch your speed, don’t try to drive too far if you’re tired, and make sure your vehicle is equipped with equipment needed for the conditions. The most important thing is to always wear safety belts and never get behind the wheel after having too much to drink.”
He notes that the Federal Emergency Management Agency reports traffic accidents as the leading cause of death during winter storms.
According to the Lapeer County Sheriff Department’s incident report, deputies responded to 31 reports of vehicles off the roadway and 30 traffic crashes that resulted in four injuries on Monday.
Donnellon suggests the following tips for safe travels for area drivers this winter:
•Check your tires, engine oil, antifreeze, and brakes before leaving on a trip.
•Buckle up, and make sure your passengers do too.
•Reduce speed in snow, sleet, and rain.
•Allow yourself plenty of extra braking space in slippery conditions.
•Avoid travel down unplowed roads.
•If you break down, don’t venture far from your vehicle to seek help.