Swan Valley is next assignment for Almont

ALMONT — Almont will look to become the third football team in school history to reach the state semifinals (the 2011 and 2014 squads accomplished the feat previously) this Saturday when it hosts Saginaw Swan Valley for the Division 5, Region 4 title. That matchup lists a 1 p.m. starting time.
Saginaw Swan Valley, the Tri-Valley Conference East runnerup, goes into the clash coming off a 21-7 road victory over Frankenmuth.
Before that, Saginaw Swan Valley took seven out of 10 contests. That run featured a 34-21 loss at Cedar Springs; a 49-12 triumph at Bridgeport; a 49-0 win against Birch Run at home; a 34-13 victory over Alma at home; a 23-20 setback at Frankenmuth; 49-14 road triumph against Standish Sterling; a 45-6 win over Freeland at home; an 8-0 victory against Essexville-Garber at home; a 34-7 road loss to Flushing; and a 46-28 triumph over Essexville-Garber.
Almont, the Blue Water Area Conference champion, enters the fray fresh off a 22-20 road victory over Marine City.
Prior to that, Almont won all 10 of their clashes. That stretch included a 54-6 triumph against New Haven at home; a 56-7 win over Imlay City at home; a 35-0 road victory against Algonac; a 61-20 triumph at North Branch; a 42-0 win over Cros-Lex at home; a 48-14 victory against Armada at home; a 49-0 road triumph against Yale; a 50-12 road win over Clio at home; and a 30-20 road victory against Richmond. 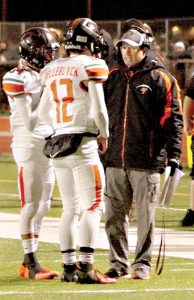 Leusby said his ballclub is anxious to see how they stack up against Saginaw Swan Valley.
“We are excited to be playing in a regional championship for the first time since 2014 and we are especially excited to be playing on our home field,” Leusby said. “Our community has shown incredible support by traveling in droves to our first two playoff games and we are proud to have earned a home game for them,” he noted.
“We know this is going to be a big challenge. Swan Valley is a great team with a lot of playoff experience, having played in the 2017 finals and reaching the semifinals a year ago. They have a lot of speed and toughness on both sides of the ball so we definitely will have our work cut out for us this week. That being said, our kids are excited for the challenge and will put in another solid week of work. The district title was one of our goals, but our kids want more and they will show that on the practice field this week.”
Leusby projects Josh Hellebuyck (quarterback), Jack Paupert (running back), Michael Lulgjuraj (running back), Mason Smith (running back), Brandon Hunsaker (fullback/guard), Derek Johnston (center), Jacob Hausmann (guard), Nathan Kerby (tackle), Carson
Tennant (tackle), Jackson Malcolm (tight end) and Colby Schapman (split end) as his possible offensive starters.
He lists Nolan Panduren (end), Meric Okoniewski (end), Michael Rinke (tackle), Lane Jackson (tackle), Landon Kruse (linebacker), Blake Kapron (linebacker), Hausmann (linebacker), Caleb Weigand (back), Jacob Castillo (back), Paupert (back) and Schapman (back) as his potential defensive starters.
The winner of this Saturday’s confrontation will meet the victor of an encounter between Dearborn Heights Robichaud (9-2) and Detroit Denby (9-2) on Saturday, November 23 in the state semifinals at a site yet to be determined.