ALMONT — Steve and Sue Francis, owners of the Country Smoke House, continue to seek alternate locations to make product following the October 4 fire that caused extensive damage to the business’s contents, including product and meat processing equipment.
Family spokesperson, Stephanie Doss, said that fresh deli products are now being made by her father, Steve, and Smoke House staff at Fronney’s Foods in Capac.
Some of those items include bulk sausage and links, bratwurst, chicken breast, various roll-ups, burger patties, steaks, sandwich spreads, salads, jams, jellies and pickled products.
“We don’t want people to think we are able to make everything right now — because we cannot,” said Doss. “We are still looking for a temporary plant to start making products such as snack sticks, salami, and jerky to sell at Fronney’s and at our upcoming shows in
Novi.”
She said some products will be available at the Novi Pet Show, scheduled for Nov. 15-17. 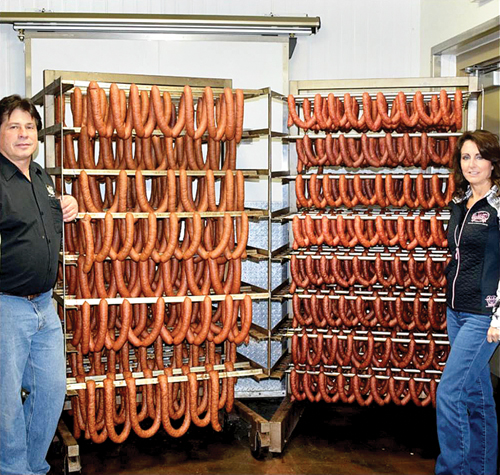 Country Smoke House owners Steve and Sue Francis are pictured here with some of their award-winning sausage products.

No deer processing
Doss reminded that the Country Smoke House will not be able to accommodate deer processing during the 2019 hunting season.
“Unfortunately, we were not able to find a location to process deer,” she said. “We are now telling our customers to save their venison trim and to bring it back to us when we reopen.”
Demo, rebuild status
Doss noted that the burned-out portion of the building has been gutted down to the studs and is being cleaned out.
“The part of the roof damaged in the fire has been taken off and the new roof is on,” she said. “Now, we just need some good weather to keep moving forward.”
On the plus side, Doss said the business’s ongoing USDA-approved expansion project, which was unaffected by fire, is continuing as planned. She pointed out that more retail space will be included as part of the expansion.
Meanwhile, Doss estimates that the Country Smoke House will not likely be able to fully reopen for business for another 4-6 months.
“Hopefully, we’re looking at an early spring reopening,” said Doss.
Employees affected
Firefighters from six local departments responded shortly after midnight on Friday, Oct. 4 to the fire at 3294 Van Dyke (M-53) in Almont Township.
The blaze resulted in about 90% damage to the structure’s roof, retail space, storage and meat processing areas.
Because of the damage, dozens of employees found themselves out of work during what is traditionally the Country Smoke House’s busiest time of the year.
An investigation of the fire conducted by Michigan State Fire Marshals, insurance investigators and the Almont Twp. Fire Dept. revealed the fire began when lint ignited in a clothes dryer vent and spread to the roof.
There was no official estimate of damage, though it is believed to have been more than $1 million.