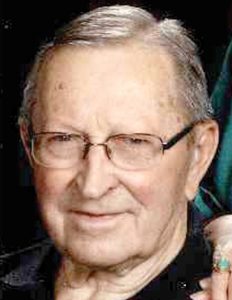 Carl Elliott, age 88, of Imlay City, MI passed away peacefully, surrounded by family on Wednesday, November 6, 2019 at McLaren Lapeer Region Hospital. Carlton Ware Elliott was born April 3, 1931 in Lum, MI. He was the son of the late William Ware and the late Edith Jane (Armstrong) Elliott. Carl grew up in Imlay City, MI. He attended Imlay City High School. Carl married Nancy Josephine Nemecek on March 22, 1959 in Capac, MI.
He proudly served in the United States Army during the Korean War from 1952 – 1954. He was a 60-year member of the American Legion Post 0135. Carl began his career as a truck driver for Lapeer County Road Commission. He went on to work for Ford Motor Company at the Romeo Proving Grounds and eventually was employed by and retired from Liquid Carbonic/Prax Air as an over-the-road semi-truck driver. During his career as a truck driver and member of the Teamsters Union, he served his fellow drivers as a union steward.
Carl enjoyed camping with his family in their travel trailer all over the State of Michigan. He had a great love of the outdoors and our Great Lakes State, creating family traditions that are carried on by his children and grandchildren. In his younger years, he was an avid hunter and enjoyed a relaxing day of fishing.
He is survived by his wife, Nancy Elliott; his three daughters, Jana Lyn (Robert) Pemberton of Imlay City, MI, Julianne (Jeffrey) Gallourakis of Big Rapids, MI and Janaye (John) Shack of Imlay City, MI; one sister, Audrey Schroeder of Caseville, MI; daughter-in-law; Mary Elliott of Shelby Twp., MI; and his eight grandchildren, Sydney, Robbie, Joseph, John, Caterina, Nathan, Emily and Ava.
Carl was preceded in death by his son, Dean Carlton Elliott; granddaughter, Emily Gallourakis; two sisters, Helen (Ken) Lucas and Gladys (George) Agnew; his two brothers, William “Billy” Elliott and Lester (Betty) Elliott; and his brother-in-law, Edward “Bud” Schroeder.
Cremation has taken place. The family is planning a private memorial at a later date.
Arrangements were made by Muir Brothers Funeral Home, 225 N. Main St., Imlay City, MI.
Please be sure to sign the online register at muirbrothersfh.com to share condolences and memories.