ALMONT — The Almont football team came up big at a time they needed it most, stopping a two-point conversion bid with 21.6 seconds remaining, and that lifted them to a dramatic 22-20 victory over host Marine City in a Division 5, Region 3, District 2 championship battle last Friday night.
East China Stadium is where the action unfolded.
With the outcome, Almont (11-0) advances to a regional title encounter this Saturday where it will host Saginaw Swan Valley (8-3). That matchup lists a 1 p.m. starting time. Marine City watches a 10-1 campaign reach an endpoint.
“Our kids came through in the clutch tonight and that was the difference in the game,” Almont Coach James Leusby said. “We have nothing but respect for Marine City and they brought physicality tonight,” he noted.
“We are so proud of our kids and are excited for our community. The best part is that we earned a home game and are looking forward to seeing our fans out in full force again.”
In Friday’s district championship game contested under bone-chilling weather conditions (temperatures started in the low 30s and dropped below that as the contest progressed), Almont reached the scoreboard first when they closed out their initial possession with a one-yard touchdown run by Josh Hellebuyck. It came with 2:53 showing on the first quarter clock.
Almont then tried to add to their lead with an accurate extra point kick, but to no avail. The Raiders’ lead stood at 6-0, a score which would remain the same minutes later when the opening quarter clock zeroed out.
It would prove awhile before the scoreboard count would change. When it did, Marine City capitalized on a 61-yard touchdown pass from Colby Walker and a successful extra point kick by Felix Kapp with 1:58 showing on the second quarter clock, grabbing a 7-6 edge at the time.
Not long after, Marine City and Almont headed to their respective locker rooms with the former up by a narrow one-point margin. 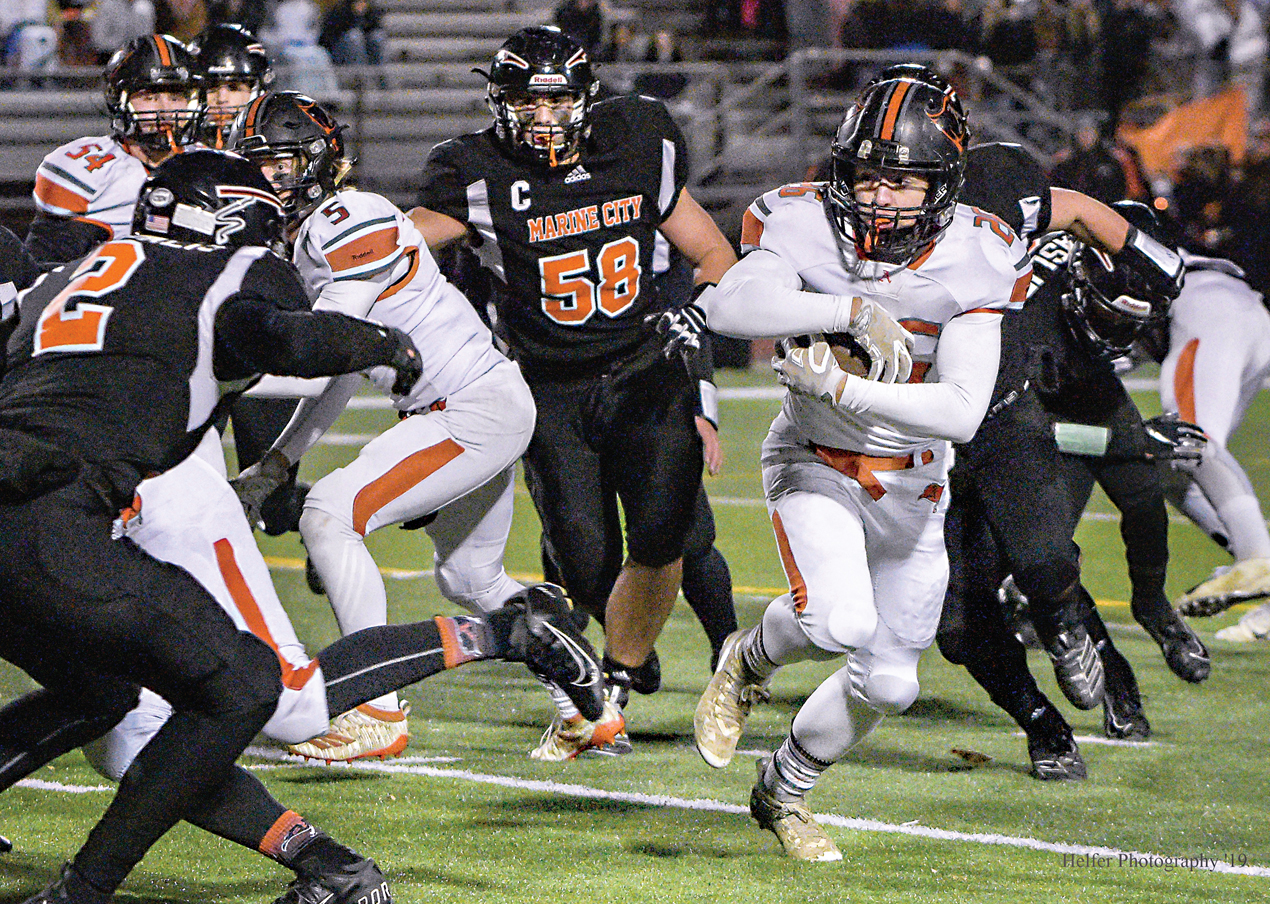 When the action resumed, Almont bounced back with a a Jack Paupert three-yard touchdown run and a Mason Smith PAT tote with 3:39 showing on the third quarter clock. That staked Almont to a 14-7 advantage at the time. The remainder of quarter three would prove scoreless.
Marine City then made it a 14-14 contest when Walker hit Angelo Patsalis with a four-yard touchdown pass and Kapp added an accurate extra point boot 7:05 from the finish.
The contest was back up for grabs again and both teams knew it.
Just 4:12 later, Almont regained the lead at 22-14 when Paupert delivered a 29-yard touchdown run and a PAT tote.
The only question was whether or not Almont could hold off Marine City the rest of the way.
Marine City then marched the ball in to Almont territory during the final minute of play. It was there they kept the outcome in doubt a bit longer when Charles Tigert scored on a run from one yard out. There was now just 21.6 seconds remaining and Marine City trailed 22-20.
The hosts then lined up for a two-point conversion bid. It was there they were stuffed a couple yards shy of the destination they had hoped for, thanks to the efforts of a stingy Almont defense.
Marine City then tried an onside kick that was recovered by Almont’s offense.
One offensive snap later, Almont took a knee and allowed the remaining time to run off the clock.
Almont had prevailed. And oh what a finish it was at that.
For the evening, Hellebuyck completed five of 15 pass plays for 74 yards as Almont’s quarterback. He threw one interception along the way.
His successful tosses went to two different targets. Their ranks consisted of Colby Schapman (three catches for 47 yards) and Paupert (two receptions for 27 yards).
The Almont ground attack managed 188 yards on 41 totes.
Individually, Smith (13 rushes for 88 yards) and Paupert (63 yards on nine totes) headlined for Almont. The remaining 19 Raider rushes netted a combined 37-yard gain.
Blake Kapron (two solos and 10 assists), Jacob Hausmann (three solos and seven assists) and Nolan Panduren (seven assists) put up Almont’s best defensive numbers. Michael Rinke (five assists) made his presence felt as well.
The Almont defense also registered one takeaway en route to the favorable verdict. Landon Kruse (an interception which led to the second Raider touchdown) furnished that.