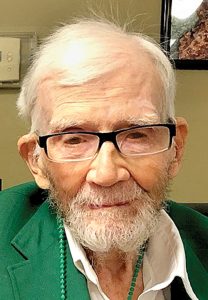 Thomas Samuel Chisholm, 100, of Lapeer, formerly of Dryden, was born December 26, 1918, in West Bloomfield, MI. During his childhood Tommy lived in Michigan, New York, and South Carolina and graduated from Oxford High School in 1938. He attended Michigan State University before eventually leaving to work in the horse business. Tommy was drafted into the U.S. Army in November, 1941, in the 1st Calvary Horse Division out of Ft. Bliss, TX. Between 1943-1945 he traveled to various countries including Australia, India, China, Burma and the Philippines providing care to the horses used to transport troops and supplies. He was honorably discharged on February 6, 1946. Tommy married Doris Krohn on November 25, 1946 at St. Joseph Catholic Church in Lake Orion and the couple moved to Dryden in the early 1950s, where they lived for the remainder of their lives. Tommy was a member of the Bloomfield Hills Hunt Club and the Metamora Hunt Club, owned his own horse transportation business, and owned thoroughbred horses himself, including the very successful “Joann Dryden.” His wife Doris passed away in 2001 after 54 years of marriage. They had one son, Mike, who passed away in 2011.
Tommy is survived by his daughter-in-law Peggy Chisholm, his grandson Jeff (Stephanie) Chisholm, and sister-in-law Elizabeth Ruthenberg.
There will be a small celebration of life event held for Tommy at a future date.
In lieu of flowers, donations can be made to Residential Hospice, 1681 Woodbridge, Lapeer 48446 or Dryden Police Department in memo: In memory of Tommy Chisholm.
Arrangements were entrusted to Muir Brothers Funeral Home in Almont. To sign the online guest book please visit www.MuirBrothers.com.