Pickleball in the park

IMLAY TWP. — Just as they had hoped, township officials were able to complete the bulk of park projects yet this fall thanks to state grant funding.
In recent weeks, contractors paved the hall’s existing gravel parking lot, installed a paved path from the parking lot to the splashpad and created a new pickleball court just to the north of the township hall on Fairgrounds Road. 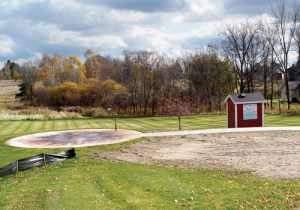 Users of the township’s popular splashpad will now have easier access to the water feature thanks to a paved pathway.

The improvements to their facilities were made possible by a $75,000 Recreation Passport Grant from the Michigan Department of Natural Resources. State officials announced the grant award late last year and the township board formally adopted a resolution accepting the grant in January and pledged to contribute some of their own funds toward the work too.
In August, the township board awarded a park improvement contract to Oak Construction for $178,335, one of three bidders for the work.
Supervisor Steve Hoeksema said their goal was to get most of the major work done in 2019 and finish up the remainder in 2020 once the weather cooperates, like seeding grass around the new paved pathway and putting the finishing touches on the pickleball court, including marking the court and installing fencing.
Pickleball is described as a combination of badminton, tennis and table tennis. Township officials decided to add the court
to their park plans at the urging of local residents who play the game but rely on modified tennis courts to conduct matches.
In 2016, ambassadors with the American Pickleball Association hosted a clinic at the former tennis courts behind the Imlay City Middle School to encourage local residents to try out the sport.
Locally, pickleball enthusiasts can play indoors two days a week at the Lapeer Rec Center. Elsewhere dedicated pickleball courts are found in St. Clair County’s Clyde Township and Macomb County’s Shelby and Clinton townships.
Funds for the Recreation Passport grant program come from the sales of the state’s Recreation Passport, the $11 annual pass that grants residents vehicle entry at state parks and recreation areas throughout
Michigan.