CAPAC — So what’s it like to work at a modern manufacturing plant?
And just what types of skills and knowledge base are required to land a position at such a plant?
And of course, how much does the job pay?
On Thursday, Oct. 24, staff and management at Keihin Michigan-Manufacturing of Capac answered those questions and more for 47 Capac High School 10th graders who visited the facility in conjunction with the plant’s 5th annual “Manufacturing Day.”
Welcoming the students were Keihin Production Manager Amy Robinson and HR Administrator Lori Herbert, each of whom discussed their specific roles with the company and the various other jobs available at the Capac plant.
The  plant at 14898 Koehn Rd. currently employs about 172 people and operates either two or three shifts, depending on current demand.
Robinson said those jobs can run the gamut of interests and skill levels, ranging from molding and production to engineering and robotics.
Noting that quality, efficiency and productivity are essential ingredients in manufacturing, Robinson  said Keihin jobs typically require working with one’s hands, problem solving, computer skills, strong communication, and the ability to work as a member of a team. 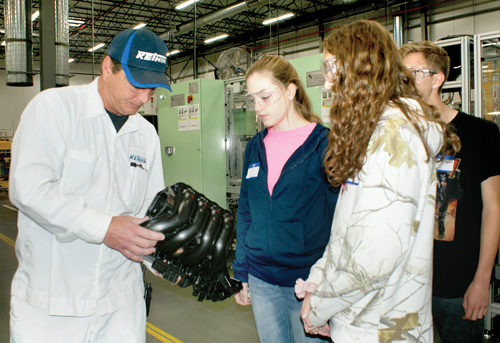 Longtime Keihin employee Austin Davis, who led a group of students on a tour of the facility on Thursday, displays one of the various Honda parts manufactured at the company’s Capac plant on Koehn Road.

Robinson also addressed what she described as some of the “myths and fallacies” surrounding factory work — including that it is dirty, repetitious, mundane and pays minimally.
To the contrary, Robinson said Keihin’s work environment is pristine, its job descriptions vary and can be alternated, and that employees are paid well when compared to those in other fields.
“I  love working here,” said Robinson unabashedly. “I love what I do and I enjoy working with my fellow employees.”
She added that Keihin’s outstanding quality and efficiency record speaks for itself, and of the pride and spirit that exists among employees.
Before viewing a short film, Plant Manager Bo Shirling talked about Keihin’s product line, which includes making fuel and HVAC assemblies, intake manifolds and molded parts for Honda motorcycles and vehicles, including the popular Honda Accord, Civic and Acura models.
Following the presentation, students broke off into smaller groups to tour the facility; with some marveling at the steady  pace and pinpoint accuracy of the plant’s robots.
“Machines don’t take breaks and they rarely break down,” Shirling teased the students.
Joining the students on the tour were Capac High School Principal Nicole Kirby and special education teacher Rebecca  Setera, who also happens to serve as the high school’s transition coordinator.
In that role, Setera helps students make the transition from high school to college, trade school or the job force.
“It’s important that students realize they have career options,” said Setera. “Not everyone is inclined or interested in going to college.
Setera said young people need to know there are lots of great, good-paying jobs available to them in manufacturing and other fields.
“One of our goals is to expose students to as many career opportunities and pathways as possible during their high school careers,” Setera said.   “Additionally, we want manufacturers to inform students of what training and skills they will need for jobs they hire.
“Modern manufacturing looks nothing like manufacturing did a generation ago,” she continued. “During the tour, our students were able to see people working in many positions, including  robotics, computer programming, mechanical engineering, biochemistry and remote operations.”
Setera extended kudos to the Keihin staff and management for making the visit informative, interesting and fun for visiting students.
“The staff at Keihin Corporation was helpful and welcoming,” she said. “It was an amazing day for everyone.”
A few of the young visitors expressed their post-visit opinions of the experience.
“I would work there,” said Jordyn Wheeler. “It looks fun and I do like doing things like that.”
Luke Coltson opined that manufacturing is a field he might well consider when seeking employment.
“It’s an underrated career choice,” said Luke.
Student Erica Yeashevich voiced her overall positive impression of the plant’s staff, employees and operations.
“Keihin seems like a great plant with nice people,” said Erica.
Keihin facts
& figures
The 123,000-square-foot Keihin plant was constructed on 27 acres of property off Koehn Rd. in 2007, and went into mass production in March 2008.
The injection mold facility makes and assembles manifolds, HVAC assemblies and fuel parts for Honda, which are exported to Canada, Mexico and locations overseas.