IMLAY CITY — The Imlay City volleyball team rallied for a 21-25, 18-25, 25-23, 25-23, 15-12 triumph against Cros-Lex in a Division 2 district volleyball opening round battle Monday night.
Armada High School is where the action unfolded.
Monday’s victory marked the first time in 13 years Imlay City has won a district game. 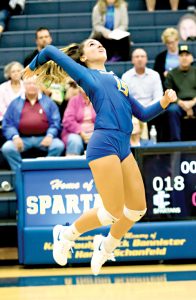 Rylee Dingwell, of Imlay City, gets ready to hit a shot at the net during a match this season. Photo by Rod Soule