DRYDEN — Sixteen-year-old Shane VandenBerghe from Boy Scout Troop 130 has big plans for the playground area at his hometown’s General Squier Memorial Park. Shane has been working hard to organize, plan, and make his vision for his Eagle Scout project at the county-operated facility a reality.
Shane decided to focus his efforts there because “the playground at General Squier Park as it is is outdated, not up to code and is no longer safe.”
His plan includes removing all current playground equipment and taking the old footings out.
“For my project I will be installing a new two- bay swing set, border and ADA approved footings. If additional funds are raised, I would also like to install benches, a play structure, and other playground equipment. The plan is to start my project in April, 2020.” VandenBerghe explained.
Shane is responsible for the entirety of his project. 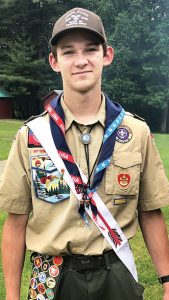 Before he starts the manual labor in April 2020, Shane VandenBerghe will be busy organizing fundraisers for his Eagle Scout project.

“Parents can help some in the planning stage but when it come to the completion stage I have to recruit scouts, friends, and other volunteers to help complete the project,” Shane said. Supporting him in this endeavor are Shane’s parents, Sarah and Nathan.
Shane says his role model is his Scout Master, Matt Keller.
“I have been with this troop and with Matt Keller since I crossed over from Cub Scouts to Boy Scouts in 6th grade. I’m sure Mr. Keller could tell many stories about me.”
Shane said Keller has been a huge support to him as he works on the playground project.
Not only is Shane focused on building a safer and kid-friendly park in his own community, but he is also busy at school and in other extracurricular activities as well.
“I am in the Marching Band at Oxford High School, run cross country, participate in robotics, and run track. I am a member of North Branch Finish Line Swine where I have shown in 4-H Swine for 2 years and in Tally Ho 4-H Horse Club for 6 years,” he said.
“Next year, I will also try my hand at showing dogs.”
The total cost for his project is $17,000. Shane has been applying for grants and reaching out to the local community.
In order to complete his project at General Squier park, Shane is hoping that the community will help out.
“Since this is a big undertaking, I will be fundraising in many different ways, including a bake sale at TSC, a bowling fundraiser at Hideaway Lanes in Almont, donation jars at local businesses, and a GoFundMe Account,” Shane said.
To give online visit, https://www.gofundme.com/f/shane-vandenberghe039s-eagle-scout-project. Direct donations can be mailed to Oxford Bank or to Lapeer County Parks and Rec c/o Shane VandenBerghe Eagle 2020, 255 Clay St., Lapeer, MI 48446.