Raiders open postseason with another

ALMONT — Almont saw to it that their postseason path would continue, earning a 30-20 win at host Richmond’s expense in a Division 5, Region 3, District 2 semifinal game last Friday night.
With the outcome, Almont (10-0) advances to this Friday’s district championship battle at East China Stadium. There they will square off versus Marine City (10-0) in a matchup that lists a 7 p.m. starting time. Richmond finishes their season as owners of an 8-2 mark.
“We knew it would not be easy beating Richmond on their home field again,” Almont Coach James Leusby said. “We have to give Richmond credit for matching our physicality tonight,” he noted.
“We have a lot of respect for their program. We are one step closer to our ultimate goal but we can only take it a game at a time.” 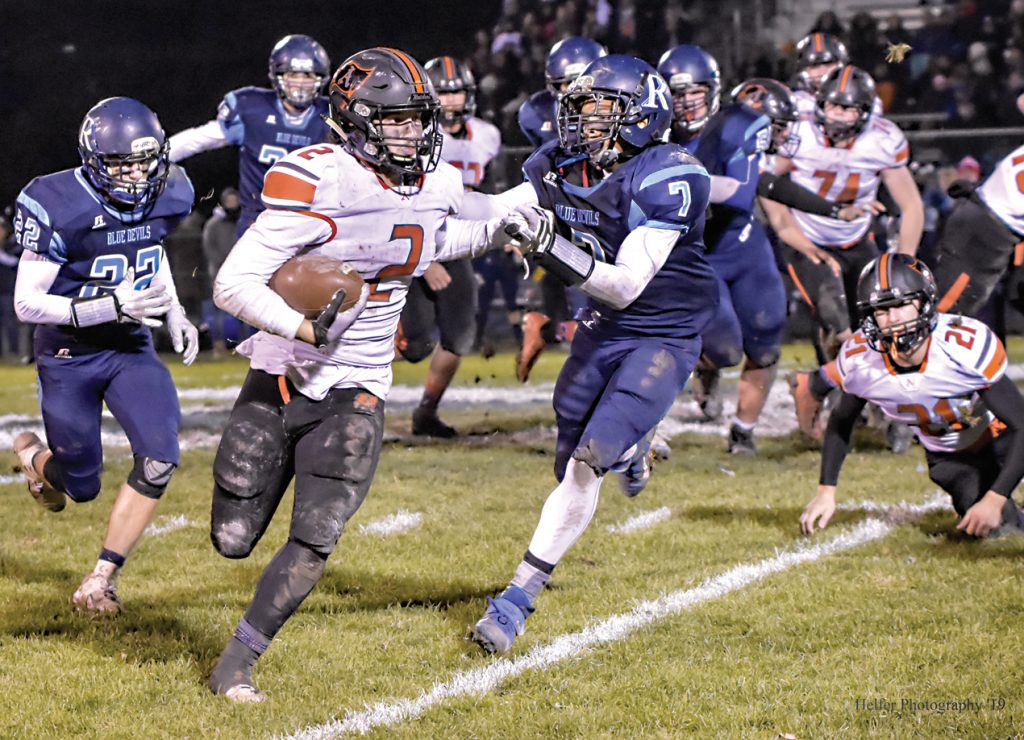 Michael Lulgjuraj, of Almont, looks to break free from the Richmond defense in last week’s Division 5 opening round battle. Photo by Helfer Photography

In Friday’s battle, Almont spotted Richmond a 7-6 edge after one quarter was over with.
Quarter two saw Almont bounce back with a 16-0 advantage, good for a 22-7 cushion at the halftime break.
When play resumed, Richmond struck with a 6-0 third quarter edge. That trimmed their deficit to 22-13 with 36 minutes gone.
Almont then outscored Richmond 8-7 the rest of the way, closing out a 30-20 win.
The victorious Almont side generated their 30-point output aided by a Josh Hellebuyck one-yard touchdown run; a Hellebuyck to Colby Schapman 68-yard touchdown pass (followed by a Michael Lulgjuraj PAT tote); a Jack Paupert five-yard touchdown run (followed by a Lulgjuraj PAT tote); and a Hellebuyck one-yard touchdown run (followed by a Hellebuyck to Paupert PAT pass).
For the night, Hellebuyck completed two of six pass plays for 98 yards as Almont’s quarterback. He threw one interceptions along the way.
His successful tosses were distributed to Schapman.
The Almont ground attack managed 232 yards on 47 totes.
Individually, Lulgjrarj (14 rushes for 118 yards), Paupert (55 yards on 13 totes) and Mason Smith (11 rushes for 40 yards) proved Almont’s most productive ballcarriers. The remaining nine Raider totes netted a combined 19-yard gain.
Jacob Hausmann (two solos and 13 assists) and Blake Kapron (two solos and 10 assists) paced the Almont defense. Paupert (two solos and three assists) made his presence felt as well.
The Almont defense also registered one takeaway en route to to victory. Paupert (an interception) registered that.