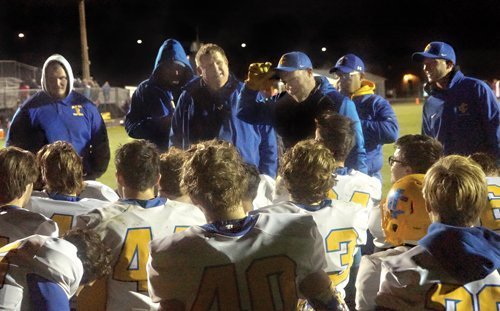 IMLAY CITY — Imlay City just missed out on becoming the second Tri-City Area football team to reach the state playoffs this past weekend.
When the final playoff points were announced, Imlay City and Durand managed identical point totals in their pursuit of the final at large playoff berth for Class B squads.
All of the tiebreakers then were utilized with hopes of determining which side would continue their postseason path, but to no avail.
That meant a coin flip would be used to declare which side advanced.
Sunday morning’s toss favored Durand, putting an official end to Imlay City’s season.
“It was difficult to have our season come to an end watching a coin toss over FaceTime,” Imlay City Coach Brian Tresnak said. “Obviously we are all disappointed that we didn’t get in the playoffs,” he noted.
“At the same time we had opportunities during the season to win a sixth game and control our destiny. I am proud of the way our young men played hard all season and their commitment to getting better every week. We played hard for nine games the way you are supposed to. I am thankful for the leadership our seniors provided and the example they set. Their contributions have hopefully laid the foundation for us to build a successful program in the years to come.”