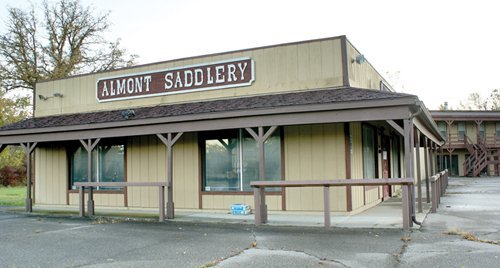 Business owners Chris and Jaason Bishop are hoping a move to Almont will translate to more foot traffic and increased business revenue. Their plans are to move into the eastern portion of the building in December.
IMLAY CITY — Imlay City business owners Chris and Jaason Bishop are packing up and heading south — just down the road to Almont.
The Bishops, owners of Backyard Creations & More at 404 E. Fourth St., announced their location change at the Oct. 15 Imlay City Commission meeting.
Chris Bishop said the couple is moving into the southeast portion of the former Almont Saddlery at 780 N. Van Dyke in the Village of Almont.
The Bishops moved into the Fourth Street location in mid-January, and for a time, experienced steady sales of antiques, crafts, gift items and Jaason’s custom-made barnwood items.
Chris said everything changed when she was forced, per Imlay City’s sign ordinance, to remove a 2-foot-by-3-foot sign from the corner of Van Dyke, which directed passing motorists to the store’s location.
She said the sign’s removal coincided with a marked reduction in foot traffic and sales, noting that she only made $13 in sales during the first two weeks of October.
“I had new customers every day because they saw my sign,” Chris recalled. “I hope in the future that the city will be more supportive of the businesses that are off M-53.”
Move is ‘bittersweet’
Chris said she is going to miss Imlay City, but is now anxious to make the transition to their new location in the Village of Almont.
“We are both sad, but excited,” she said. “This is going to be a new opportunity for us. We’re looking forward to it, and we’re going to have a lot more space in the new location.”
Pending unexpected delays, Chris hopes Backyard Creations & More will be up and running at the Almont location by early December.
Good news for Almont Once a popular local destination, the former Almont Saddlery building had been empty for many years, until purchased two years ago by Dave Mroz, owner of Oz Motor Sports.
While the Bishops will occupy the southeastern portion of the building, Almont Downtown Development Director, Kim Schall, said Mroz is planning to move Oz Aqua Transfers into the building’s middle section.
Additionally, Schall said local businessman Andy Roosa is in the process of remodeling the building’s western-most portion as home for his new Edward Jones office.
“From the DDA’s perspective, this is a win-win-situation for everyone involved,” said Schall. “This is a very well-known building and a great location.
“We want to welcome all three of these businesses and we wish them the greatest success,” she continued. “This is great news for our business community and great for the whole Almont community.”