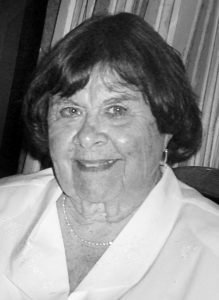 Helen Ruth Hoke, aged 93, passed away on October 14, 2019 at her residence in Eagan, MN, from natural causes. Helen began her long, loving and productive life in a small farm town north of Detroit – Capac, MI – on October 6, 1926. Helen’s parents, William J. Hildebrandt (1884-1977), a farmer, and Grace C. Hildebrandt (1896-1990), a schoolteacher and school principal, owned a centennial farm that produced a variety of crop and dairy products. Helen told stories of her and her sister Marjorie being born on the kitchen table of the family farmhouse, milking cows and tending their large vegetable garden and canning each year. She spoke fondly of her happy childhood in Capac and was especially proud of her mother’s leadership role in the education community and strove to follow in Grace’s footsteps as a teacher.
Helen was an active and enthusiastic ELCA Lutheran her whole life. She was valedictorian of her high school class and chose Capital University, a Lutheran college in Columbus, OH, to pursue her interests in mathematics and teaching. She graduated from “Cap” in 1948 and returned to Michigan to begin her teaching career. After teaching in St. Clair, MI for a few years, she attended the University of Michigan where she earned a master’s degree in education in 1953.
It was in Ann Arbor that she met George J. Hoke (1929-2016), at the time a Navy veteran
who was enrolled at Michigan too. Helen
and George were married in 1953 and their first child, Terry, was born in 1954. Soon after, they settled in East Lansing, MI where George attended Michigan State University on a ROTC scholarship and Helen taught elementary school. After George’s graduation from MSU, the
family moved to Texas where George began his U.S. Air Force career
and Helen taught school. The couple’s second child, Cinda, was born
in McAllen, Texas
in 1958.
After living the life
of a military wife while raising two young children in Texas, Bermuda, Florida and Delaware, Helen eventually returned to Michigan in 1966 as a single parent. She chose East Lansing to rebuild her teaching career and raise Terry and Cinda. She began an over 40-year relationship with the University Lutheran Church, where she worked as a church secretary, treasurer and very active volunteer while substitute teaching as opportunities allowed.
Helen always had good mathematics and teaching skills so when the opportunity to teach at Lansing Community College surfaced, she enthusiastically joined their staff to begin her 26-year career with the college. She loved her job at LCC, where she taught a range of math classes, elementary education and later, computer science. She treasured her colleagues at LCC and built friendships that lasted decades. Helen often talked about her students, her colleagues and her math conferences held in cities around the country. She worked hard, putting in long hours, often grading tests and preparing for her classes late into the evening.
After retiring from LCC in 1993, Helen drove all over the country, visiting family and friends. Later in life, Helen had challenges with her hearing, but she became a prolific letter and email writer, always wanting to keep in touch with her many friends and relatives. She was a devoted mother and grandmother, usually spending many weeks a year with Terry and Cinda and their kids, always willing to help out any way she could. In 2009 Helen reluctantly left East Lansing and relocated to Apple Valley, MN to be near Cinda and her family. She lived independently until 2017, after which she resided in an assisted living residence in Eagan, MN.
Helen will be remembered by her family and friends as always kind, generous, optimistic, positive, happy and, someone that genuinely liked people and wished all she knew the very best. She was a devout church goer and she loved music and played piano beautifully all of her life. She played the church organ at University Lutheran for many years. She was invariably cheerful, full of good will and provided her grandchildren with a good example on what it meant to be a doting grandparent and a positive contributor to her community. She was an important part of our family and we will miss her as will her friends.
Helen is survived by her daughter, Cinda Rudolph (Gregg); her grandchildren, Rebecca Wambheim (Joe), Bradley Rudolph, Rachel Rudolph and Scott Hoke; her sister, Marjorie Kearns; her nieces, Joy Hacker (Ken), and Karen Kearns; and her nephew, Mark Kearns (MaryAnn). Those that predeceased Helen include her son, Terry Hoke (1954-2011); her grandson, David Hoke (1984-2014); and her brother-in-law, Donald Kearns (1929-2000).
Funeral services were held Friday, October 25, 2019 at Muir Brothers Funeral Home in Imlay City, MI. Officiating was Pastor Ken Hacker. Following the funeral service, a graveside service was held at Imlay Township Cemetery, where Helen was buried next to family.
Those wishing to make memorial contributions may direct them to either the University Lutheran Church, East Lansing, MI (Organ Fund) (http://www.ulcel.org/contact-us.html) or Macular Degeneration research (http://www.retinaphysiicians.com/vrs-foundation).