Fundraiser is Friday, Nov. 8th
at the Metamora Lions Club

DRYDEN — All local residents are invited to a special event on Friday, Nov. 8 to raise funds for a statue of General George Owen Squier to be placed at Dryden’s Memorial Park.
The “Support an American Hero” fundraiser takes place from 7-11 p.m. at the Metamora Lions Club, 3790 N. Oak St. in downtown Metamora.
For just $10, attendees will have access to snacks, a cash bar, Chinese and silent auctions, a 50/50 raffle and join in friendly conversation with friends and neighbors.
Live music will be provided by the Morton Brothers Band, performing memorable songs from the ’50s, ’60s and ’70s.
Tickets are currently available at the Dryden Township offices at 4849 Dryden Rd. 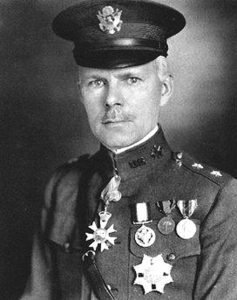 Residents are encouraged to attend a Support an American Hero fundraiser at the Metamora Lions Hall Friday, Nov. 8 to help raise money to create and install a statue of Gen. George Owen Squier at the Memorial Park in Dryden.

For further information about tickets or the Support an American Hero fundraiser, contact Darlene Johnson at 810-724-1660, or Spencer Kent at 810-542-0482.
Gen. Squier’s history
Gen. George Owen Squier was born in Dryden on March 21, 1865 and died March 24, 1934 at the age of 69.
He graduated from the United States Military Academy in 1887 and received a Ph.D. from Johns Hopkins University in 1893.
Squier was famous in the U.S. and Europe as a soldier, a scientist, inventor and an author.
He wrote and edited many books and articles on the subject of radio and electricity and in 1896, helped develop a magneto-optical streak camera, which measured the speed of projectiles inside a cannon and after they left the cannon barrel.
As executive officer to the Chief Signal Officer, U.S. Signal Corps in 1907, Squier was instrumental in the establishment of the Aeronautical Division, U.S. Signal Corps, the first organizational ancestor of the U.S. Air Force.
He also was the first military passenger in an airplane on September 12, 1908.
In 1909, while working with the Wright Brothers, he was responsible for the purchase of the first airplanes by the U.S. Army.
From 1916-1917, he was Chief of the Aviation Section of the U.S. Signal Corps, before being promoted to major general and appointed Chief Signal Officer during World War I.
He was a member of the Sons of the American Revolution.
In 1922, Squier created Wired Radio, a service which piped music to businesses and subscribers over wires. In 1934, he changed the service’s name to ‘Muzak.’