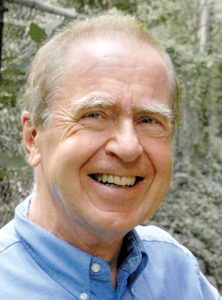 Dr. Marvel John Yoder of Andover MA died Thursday, October 24, 2019. The last few weeks of his life were filled with laughter and joy, while he connected with family, friends, and former co-workers. He was 80 years old.
Marvel grew up in Almont. He participated in sports and on the debate team and was the valedictorian of his class in 1957. He was inducted into the Almont Athletic Hall of Fame in 2016. He enjoyed returning back for class reunions and homecomings.
He graduated with a PhD in atomic physics from the University of Michigan in 1971, and pursued a 46 year long career in lasers and optics. Prior to attending the University of Michigan, he was a diver in Venezuela and piloted airplanes. He loved traveling, boating, fly fishing, skiing, making homemade beer and wine, and was a lifelong learner. He spoke both Spanish and German fluently, having worked in Venezuela and studied at the Freie Universität Berlin.
He is survived by his wife, Maureen; and four children, Eric Yoder of Michigan City, IN, Carolyn Beland of North Andover, MA, Michael Yoder of Miami, FL and Alison Yoder of North Providence, RI. He is also survived by his brother Ronald Yoder; his sisters Pamela Hall and Kathleen Yoder; eight grandchildren and two great grandchildren; and many nieces, nephews, and cousins.
Visitation will be Friday, November 1, at 11 a.m. to 1 p.m. at Muir Brothers Funeral Home, 138 S. Main Street, Almont, Michigan followed by burial in Hough Cemetery in Almont.
In lieu of flowers, donations can be made to Hyde School, 616 High Street, Bath, ME 04530 www.hyde.edu or the International Myeloma Foundation www.myeloma.org.