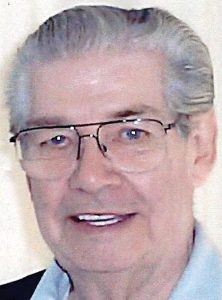 Charles Weston Day of Attica, formerly of Davison, age 90, died Monday October 21, 2019 at the Cottage of Davison. Honoring Charles’s request his body has been donated to the University of Michigan Medical School. No public visitation or services are being held. Those desiring may make contributions in Charles’s memory to McLaren Hospice.
Charles was born in Sidney, MI on July 1, 1929 the son of the late Elon and Leah (Mulnix) Day, and had resided in the Davison area for many years, spending the last thirty years in the Attica area. He married Ardis Faye Lintz and she preceded him in death on January 13, 2009. Answering the call of his country Charles served in the US Air Force during the Korean War. Charles was an avid bowler, and had been employed by General Motors Fisher Body Division until his retirement.
Surviving are sons, Chris and wife Sandy Day, and Leelon Day. He also leaves granddaughters, Leah and husband Scott Sanderson, Megan Day; great-granddaughter Madilynn Sanderson; brothers, Duane Day and James Day; and a host of extended family.
Please share your condolences at www.hansenfuneralhome.net