ALMONT — Some comfortable years could lay ahead for a 58-year-old Almont man.
With one lucky spin of the wheel on Monday, Oct. 21, Robert Hill won a cool $1 million in the Michigan Lottery’s The Big Spin show, hosted by former Detroit Piston’s star John Salley.
Hill’s prize is the largest to have been won on The Big Spin show.
Hill was selected to participate in the show after entering non-winning The Big Spin tickets at MIBigSpin.com.
An ecstatic Hill expressed shock upon his good fortune.
“Winning is a big deal and this is a lot of money,” said Hill. “When it landed on $1 million, all I could think was, ‘This is unreal — really?’”
“Winning gives me a cushion and means I can enjoy the rest of my life with my family,” he added. 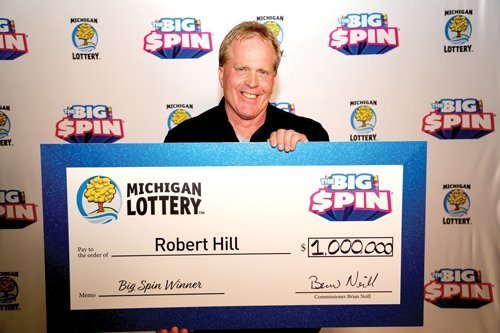 A smiling Robert Hill of Almont displays the mock $1 million check he was presented at the Michigan Lottery’s Big Spin show on Monday.

Hill chose to receive his prize as a one-time lump sum payment of about $634,500, instead of 30 annuity payments for the full amount.
Hill was one of five players selected for The Big Spin show by a random drawing. Ten more players will be selected to participate in future Big Spin second chance drawings.
Each player selected will have a chance to win up to $2 million and all players who spin The Big Spin wheel are guaranteed at least $100,000.
In 2018, Lottery players won more than $1 billion playing instant games, which may be purchased at the Lottery’s 10,500 retailers across the state.
Money for schools
About 97 cents of every dollar spent on Lottery tickets is returned to the state in the form of contributions to Michigan’s School Aid Fund, prizes to players and commissions to vendors and retailers.
In the 2018 fiscal
year, the Lottery provided more than $941.3 million for Michigan public schools.
Since its inception in 1972, the Lottery has contributed more than $22 billion to support public education in Michigan.