ALMONT — Almont made it back to back years as Blue Water Area Conference champions, accomplishing the feat with a 49-0 road triumph against Yale last Friday night.
With decision, Almont improves to 8-0 and 7-0. Yale slips to 1-7 and 0-7.
“We achieved another one of our goals with an outright BWAC title tonight,” Almont Coach James Leusby said. “We are very proud to repeat as champions and the kids have worked hard for this,” he noted. 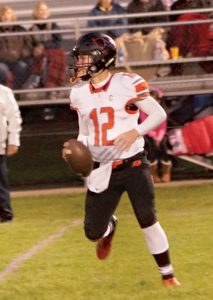