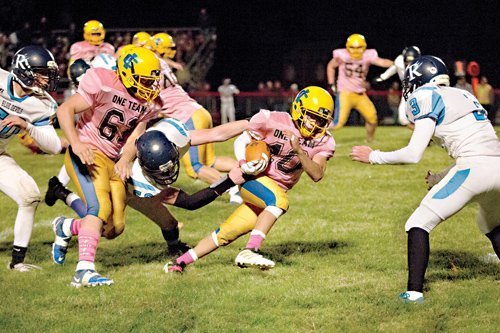 Cristian Rojas, of Imlay City, looks to pick up a first down in a game with Richmond last week. Photo by Rod Soule

IMLAY CITY — Imlay City wound up with a 35-20 loss to Richmond in a Blue Water Area Conference clash hosted by Dryden High School last Friday night.
With the outcome, Richmond moves to 7-1 and 6-1. Imlay City slips to 4-4 and 3-4.
“A bad second quarter doomed us this week,” Imlay City Coach Brian Tresnak said. “Give credit to Richmond, they are a solid team and played hard tonight,” he noted.
“We made adjustments at halftime to get guys in better position to make plays, but by then we were playing from behind.”
In Friday’s game, Richmond grabbed a 7-6 edge after one quarter was done.
Quarter two saw Richmond establish some much-needed breathing room. Thanks to a 21-0 advantage there, the Blue Devils went up 28-6 at the half.
When play resumed, Richmond struck with a 7-6 third quarter edge. That pushed their cushion to 35-12 with 36 minutes gone.
Imlay City then put together an 8-0 fourth quarter rally, only to fall 35-20.
In defeat, Imlay City produced their 20-point total aided by a Riley Bertram one-yard touchdown run; an Austin DeRocher 61-yard touchdown run; and a DeRocher eight-yard touchdown run (followed by a PAT tote by DeRocher).
For the night, Bertram completed three of six pass plays for 57 yards. He threw one interception along the way.
His successful tosses went to two different targets. Their ranks consisted of Sandzik (two catches for 55 yards) and Cristian Rojas (one reception for two yards).
The Imlay City ground attack added 293 yards on 41 totes.
DeRocher (14 rushes for 180 yards) and Cristian Rojas (51 yards on 12 totes) headlined for Imlay City. The remaining 15 Spartan rushes netted a combined 62-yard gain.
Julian Rojas (two solos and 11 assists), Wyatt Luther (three solos and seven assists), Cristian Rojas (one solo and nine assists), Lance Wolford (two solos and six assists) and Rosario Milana (one solo and six assists) supplied Imlay City’s highest tackle outputs.
Imlay City returns to action this Friday when it travels to Capac. The non-league clash begins at 7 p.m.