Future development is on commission’s radar

Old fire hall being considered as

IMLAY CITY — Construction continues on the city’s new fire hall on E. Borland Rd., east of Van Dyke (M-53), with a late January completion date in clear sight.
At Tuesday’s (Oct. 14) city commission meeting, City Manager Tom Youatt reported that the building’s concrete floor should be finished within the week.
“The steel shell is nearly complete and you can now see the shape of the building taking form,” said Youatt. “From this point on, progress should move fairly quickly.”
Youatt responded to a concern expressed earlier by Imlay City firefighter Bob Tanis, who questioned if there will be enough space for fire trucks to park in front of the new building off Borland Rd. 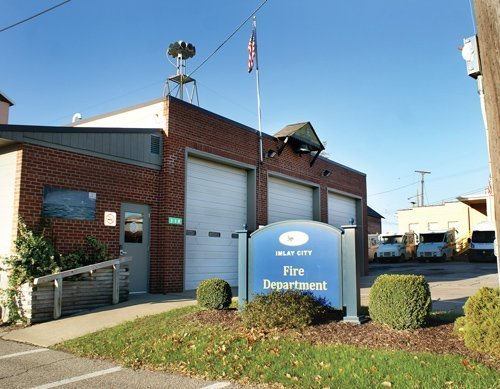 City officials are now contemplating the future of the old fire hall on Third Street; including its possible use as a year-round market space.

Youatt said he would provide Tanis and city commissioners with sketches to confirm there is sufficient room for fire trucks to park.
He added that partial payments are going out to H2A Architects ($5,040) and Superior Contracting ($113,729), for applicable architectural and construction fees associated with the new fire hall.
Youatt added that the most recent payment to H2A reduces the amount owed the architect to about 50% of total costs.
Future of old fire hall
Given the ongoing progress and the eventuality that the fire department will soon move into its new hall, Youatt asked commissioners to consider the future use of the current fire hall on Third Street.
Youatt said he has consulted with Rural Development in hopes of acquiring grant money to help refurbish and transform the old fire hall into a year-round market.
He suggested that such a project would likely include demolishing the former DPW garage and old sign shop on the south side of Third Street.
“That property is a key location for future downtown development,” said Youatt. “I think there is tremendous potential there, and it’s something the city should look at.
Green property
Meanwhile, Youatt said he met with Lorin Herman, who represents the Green Estate and the vacant property on the east side of Van Dyke, north of the railroad viaduct.
Future use of the property would hinge on the results of an environmental assessment as mandated by the Michigan Dept. of Environmental Quality.
If deemed safe for future development, the site could be eligible for a 100% grant from the MDEQ.
Finally, Youatt informed commissioners that Rightway Remediation has completed its hazardous material abatement at the vacant house at 320 N. Almont Ave.; formerly owned and occupied by the late Gertrude Thayer.
Now city-owned, the property will be razed in the coming weeks as the precursor to an expansion of Old School Park.
Meeting date change
Because of the Tuesday, Nov. 5 Imlay City Schools “no mill increase” bond proposal, the next regular meeting of the Imlay City Commission is being moved to Wed., Nov. 6 at 7 p.m.