follows in her mom’s teaching footsteps

IMLAY CITY — Nearly 20 years ago, Tracey and Erin Combs were hand-in-hand at Weston Elementary, both shedding some tears over Erin’s first days in kindergarten. This year, in that same hallway, the mother-daughter duo were the ones welcoming students and calming emotional parents—this time as teachers.
In August, Erin joined her mom on the staff at Weston as a kindergarten teacher. Tracey has taught kindergarten since 2004. So that means there’s a Ms. Combs and a Mrs. Combs.
“I think the kids are just starting to make the connection,” Tracey said last week. While headed out to the buses at the end of class one day, a student of Erin’s sized up the two teachers and asked the younger Combs “Is that your sister?”
“We get each other’s notes but that’s not a big deal…we just make a quick switch,” Erin said with a smile.
When Erin, a 2013 Imlay City High School graduate, told her mom she wanted to become a teacher, Tracey admits she grilled her oldest daughter about her intentions.
“A lot has changed in education and teachers have a lot on their plate. The responsibilities are huge and the job doesn’t stop at the door,” Tracey recalls telling her. 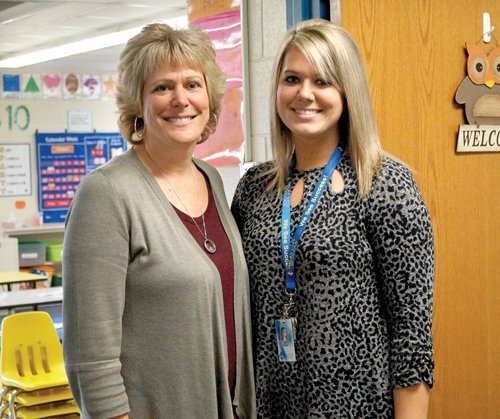 Education is all in the family for Tracey Combs and her daughter, Erin, who joined her mom as a Weston Elementary teacher in August. Both are Imlay City grads.

Yes, Erin was sure she was meant to be teacher.
“I always liked being in charge of little kids. My cousins are younger than me and we played school a lot and I always had to be the teacher,” she said with a laugh.
It also helped that she had a lot of inspiring teachers in Imlay City, saw the way her mom helped her and her sister, Ashton, at home with their school work and got a lot of experience helping in her mom’s classroom too. She was in fourth grade when Tracey began her teaching career and Erin would lend a hand getting the classroom ready or stop in after classes as a middle schooler to help with holiday parties and the like.
Erin would go on to study elementary education at Madonna University in Livonia. She graduated this past spring with her bachelor’s degree, plus endorsements in special education and early childhood education. She also played softball for four years at the collegiate level.
Tracey was confident Erin would have a bright future in education, she didn’t necessarily expect it would be under the same roof as her.
“She’s great with kids and having been a college-level pitcher, Erin is good under pressure,” Tracey said.
Erin completed her student teaching at Orchard Primary in neighboring Almont and worked as a substitute aide at Weston Elementary on her way towards earning her diploma. When a job opened at Weston this summer, Erin was excited to apply.
After Principal Jenny Buhl-Hagey delivered the good news to the younger Combs, Erin called her mom to say “howdy neighbor.” The Combs’s classrooms are just down the hall from one another.
“I know she’s going to be a great teacher and I’m looking forward to watch her grow,” Tracey said.
The pair spend time together every Sunday going over their lesson plans for the coming week.
Tracey admits she keeps tabs on Erin not because she’s her daughter, but because she’s a new teacher in a demanding job.
“I do check in on her to make sure she’s on the right track and on occasion, I do tell her ‘don’t forget about this…’” Tracey said.
“Teaching is a lot of hard work. When you’re a student teacher, you just get a small piece of it. Now there’s documents to fill out, report cards to prepare and parent-teacher conferences to plan for, plus more. She’s pretty darn lucky to have someone to go to.”
Keeping it all in the family is a running theme in the Combs family. Tracey said that her younger daughter, Ashton, a senior at Ferris State, is due to
start working on the same floor as her dad, Jeff, at General Motors next year after she graduates.
“We have some really interesting conversations at home. Jeff and Ashton will be talking about design and using jargon that we don’t understand so Erin and I will start talking about teaching and throw in our own acronyms that they don’t get,” Tracey said with a laugh.
Besides doling out advice on lesson plans, conferences and paperwork, Tracey’s been encouraging Erin to focus on the rewards of working with her students.
“Take the time to breathe and enjoy the kids. It’s amazing and rewarding to watch them grow and learn,” she said.