Almont ties for 11th in state 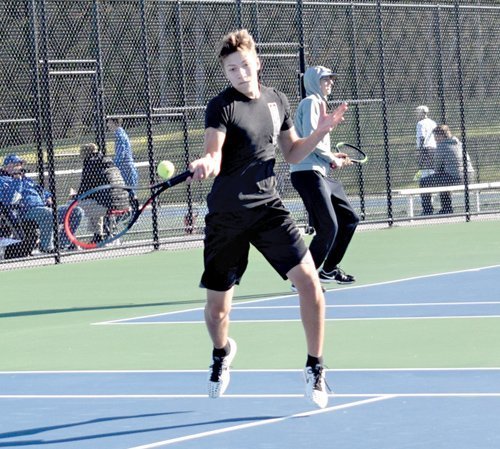 Sam Bussone, of Almont, returns a shot at the state finals.

“This group of seniors has earned the right to play in the state finals for four straight years and that is always an accomplishment,” Almont Coach Mike Bulger said. “I am proud of what they have become and where they can go after they graduate,” he noted.
Sam Bussone led Almont with a semifinal appearance at second singles.
The third seed began his stint at states with a bye, then earned a 6-2, 6-1 win against Allegan’s Tim Lyon.
He then followed it up with a 7-6, 6-2 quarterfinal victory over Jackson Lumen Christi’s Andrew Varner.
That placed him in the semifinals where Ann Arbor Gabriel Richard’s Tommy Heegan, the second seed, provided his opposition. Their encounter drew to a close with Heegan, the eventual flight champion up 6-2, 6-3.
Ethan Marcola (third singles) and Jack Jellison (fourth singles) reached the quarterfinal rounds of their respective flights before seeing their tournament path ended.
Marcola started third singles action with a bye.
The sixth seed followed that up with a 6-4, 6-4 win against Whitehall’s Ryan Findorff.
Marcola then exited tournament action with a 0-6, 4-6 quarterfinal round setback to Ann Arbor Gabriel Rafid Farjo, the second seed who would go on to place second in the flight.
Jellison began fourth singles play with a bye.
The third seed then picked up a 6-4 6-1 victory over Saginaw Nouvel’s Bill Buchalski.
Jellison then bowed out with a 4-6, 4-6 loss to Kalamazoo Hackett’s Tommy Kling.
Thomas Manko rounded out the Almont’s singles contingent, going 1-1 at first singles.
His tournament path got underway at states with a 6-1, 6-3 triumph against Berrien Springs foe Colton Stoub.
Manko then faced Ann Arbor Gabriel Richard’s Ian Sood, the second seed, next. Their clash wound down with Sood, the eventual flight runnerup ahead 6-0, 6-0.
The combination of Trey Bellanger and Nathan Castillo furnished the top Almont doubles showing at states.
Bellanger and Castillo opened third doubles action with a 6-3, 6-1 triumph against Whitehall’s Luke Derose and Christopher Mark.
They then bowed out with a 5-7, 2-6 setback to the top-seeded Grand Rapids Northpointe Christian team of Chase Berends and Sam Bradley, the eventual flight champions.
The Almont second doubles combination of Jacob Rayl and Paul Biolchini drew an opening round bye, before losing a 1-6. 1-6 decision to Jackson Lumen Christi’s Patrick O’Dowd and Cole Clifford.
Almont’s first doubles team of Darren Herman and Jacob Korte added a 0-1 mark as did the fourth double combination of Blake Campbell and Luke Schlanderer. The former fell 0-6. 0-6 to the Flint Powers combination of Method Hagen and Charlie Harrold, while the latter dropped a 2-6, 5-7 verdict to Chesaning’s Spencer Tepati and Andrew Woodcock.