ALMONT — Because of dwindling membership and the cost of maintenance and operations, the longtime home of Almont American Legion Post 479 has been sold.
The building and property at 117 School Street were part of a land contract arrangement between the Legion and DoRich Leasing, LLC. on Oct. 4.
The new owners are reportedly planning on upgrading and renovating the building for future use.
Two months ago, Legion members held a special meeting during which the assembled membership voted in favor of putting the building up for sale as an economic necessity.
Post 479 Commander Dick Bowman said the sale provides the organization an opportunity to get out from under monthly utility costs and costs of maintaining the building, which had become unaffordable.
Bowman pointed out that the Almont Legion Post, which currently has 32 members, will continue to sustain its American Legion “charter” status, presuming its numbers do not fall below 15 members. 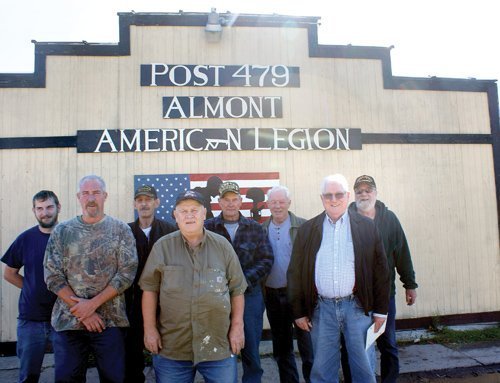 “As it is, we usually only get about five or six members at the meetings,” said Bowman. “With the sale, we now have zero overhead on a building and a substantial amount in our checking account.”
Bowman, who shares trustee responsibilities with longtime Post members Joe Cain and Larry Millikin, said the building’s sale provides the organization with financial stability for the first time in many years.
At the same time, the Legion finds itself in the unique position of being able to take on projects to benefit and give back to the greater community.
Post member Joe Cain noted that the group will continue to hold meetings, but at alternate yet-to-be-established locations.
He added that Post 479 members will also continue to conduct the traditional Memorial Day ceremonies at Burley Park and fulfill other duties such as selling poppies and laying American flags on veterans’ graves at Almont Township cemeteries.
The Almont American Legion was established in 1946, with meetings initially being held at the old Detroit Edison building. In 1974, the organization moved to the School Street location.
Current Almont American Legion Post 479 officers include Dick Bowman, Commander; Jim Cutcher, 1st Vice Commander; Tristan Grogan, Adjutant; Larry Millikin, Sergeant at Arms; Joe Cain, Judge Advocate; and Mark Dipola, Chaplain.
‘Big Buck Dinner’ Members are also on board with hosting
the organization’s traditional “Big Buck Dinner” on Saturday,
Jan. 25 of 2020. The location of the annual event is being moved to the Almont-Dryden Masonic Lodge, located at the southeast corner of M-53 (Van Dyke) and Dryden Rd.