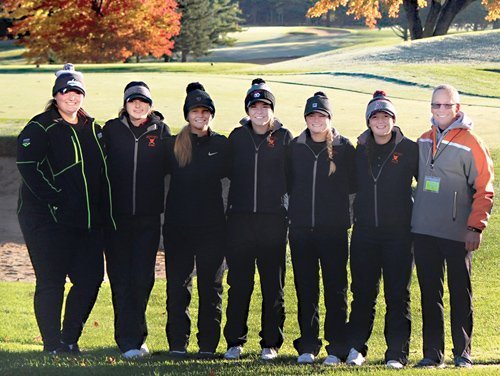 ALMONT — The Almont girls’ golf team earned an eighth-place finish last Friday and Saturday at the Division 4 state finals.
Bedford Valley Golf Course, in Battle Creek, provided the tournament venue.
Grand Rapids Northpointe Christian won the team title with a 727 total. They were followed by Harbor Springs (732), Lansing Catholic (755), Montague (762), Kalamazoo Hackett (774), Frankenmuth (806), East Jackson (809), Almont (828), Ann Arbor Greenhills (829), Traverse City St. Francis (838), Wixom St. Catherine (843), Onsted (866), Mount Pleasant Sacred Heart (867), Remus Chippewa Hills (874), Michigan Center (882), Durand (894), Adrian Lenawee Christian (897) and Manistee (924).
“I would rate our girls’ golf season as very successful,” Almont Coach Mark Bone commented. “Every girl on the team, varsity and junior varsity, showed improvement,” he noted.
“We had a lot of personal bests which were not just by a stroke or two. We repeated as BWAC and regional champions. A three-peat as regional champions is quite an accomplishment and shows the success of the program. The team has been a consistent top-ten team in the state. Once again, a testament to the strength of the program. We grew a lot, learned a lot and will continue to improve. I congratulate all the girls on their individual successes but have to emphasize the success our team has had since its inception. I look forward to our continued success.”
Brandi Kautz led Almont with a 186 over 36 holes. Kautz shot an opening round 94 and a closing round 92.
Jesse Hellebuyck had second best Almont showing, a 192. That included a pair of 96s.
Maggie Henige and Hannah Revoldt shared third among Almont golfers, thanks to matching 227s. Henige posted 109 and 118, while Revoldt managed a 114 and 113.
Riley Wranosky and Lydia Schlanderer also competed for Almont at the Division 4 state finals. Wranosky shot 114 on day two for Almont, while Schlanderer contributed a 122 on day one.