ALMONT — Almont saw to it that at  least a piece of the Blue Water Area Conference title would belong to them at night’s end, accomplishing the feat with a 28-10 road triumph against Richmond in a varsity football showdown last Friday night.
With the result, Almont  raises their mark to 7-0 and 6-0.  Richmond watches their record fall to 6-1 and 5-1.
“Our kids earned a share of the BWAC title with total team effort,” Almont Coach James Leusby said.  “We knew it was going to be a physical game and Richmond matched our physicality for much of the game,” he noted. 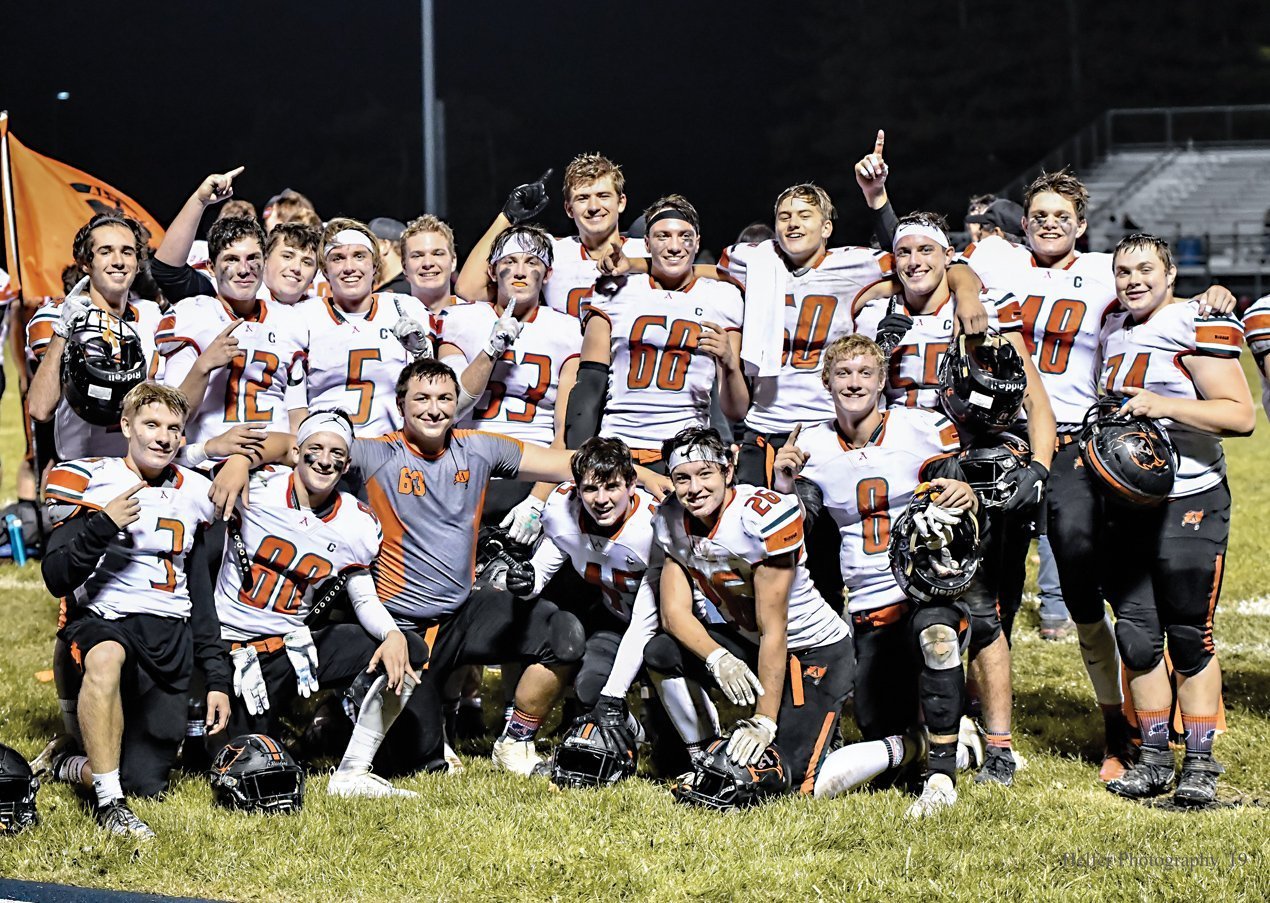 “We made the plays needed in the second half and that was the difference,   I give Richmond credit for a great high school football game in a great atmosphere.”

In Friday’s showdown, Almont spotted Richmond a 10-0 advantage after one quarter was over with.
Quarter two saw Almont collect seven points and allow none, closing the gap to 10-7 at the half.
When the action resumed, Almont struck with a 14-0 third quarter edge.  That left them up 21-10 with 36 minutes gone.
The visitors then outscored Richmond 7-0 from that point on, closing out a 28-10 win.
Almont amassed their winning 28-point total thanks to a Josh Hellebuyck to Colby Schapman 14-yard touchdown pass (followed by a successful extra point kick courtesy of Brandon Hunsaker; a Hellebuyck to Gavin Dempz nine-yard touchdown pass (followed by an accurate extra point boot from Hunsaker; a Mason Smith 10-yard touchdown run (followed by a successful extra point kick courtesy of Hunsaker; and a Smith six-yard touchdown run (followed by an accurate extra point boot from Hunsaker).
For the evening, Hellebuyck connected on four  of 11 pass plays for  65 yards as Almont’s quarterback.  He threw one interception en route to those numbers.
His successful tosses went to two different targets.  Schapman (three catches for 56 yards) and Dempz (one reception for nine yards)  formed that group.
The Almont ground attack chewed up 268 yards of territory on 36 totes.
Individually, Smith (18 rushes for 138 yards) and Michael Lulgjuraj (93 yards on nine totes) headlined for Almont.  The remaining nine Raider rushes netted a combined 37-yard gain.
Jacob Hausmann (four solos and five assists) paced the Almont defense.  Nolan Panduren (three solos and five assists), Blake Kapron (two solos and six assists) and Meric Okoniewski (six assists) made their whereabouts known as well.
The Almont defense also registered one takeway.  Lane Jackson (a fumble recovery) furnished that.
Almont will look to wrap up an unbeaten Blue Water Area Conference season when it travels to Yale this Friday.  That game is slated to get underway at 7 p.m.